Vector graphics represent the use of polygons to create images in computer graphics. These are based on vectors, made of different control points or nodes. Each of these points has a definite position on the XY axis of a work plane and determines the direction of the path. The path can have a stroke color, shape, curve, thickness, and fill. By creating vector graphics we can create beautiful digital art and design projects which can be resized as we please, without losing their quality.

Vector graphics are not only used in design, whether it’s art, web, logos, prints, typography, and others. This system is also used in completely different areas, such as air traffic control, gaming, laser light shows, plotters and more.

The sky is the limit when working with vectors! You can create whatever you imagine. Also, in some cases showcased below, you will be able to see the whole creation process, from sketches to drawing the paths and coloring.

Some of the vector works on this list were even created for popular brands, such as Adidas! Also, each one of these creative vectors has a different style.

Vector inspiration really gives designers ideas on what to include in their designs. Whether it’s for a website template, illustration or logo, inspiration is always good. We have spent a bit of time collecting up 20+ creative vectors to share with you. They are truly amazing! If you click each image, it goes to the website/design portfolio they were found on.

Some of the designs here are just outstanding and must have taken a very long time to design. If you have any vectors you would like to add to our next collection, feel free to drop us a comment.

Cube Website Redesign was created by a very talented German designer. This is a very unusual website, with cool, unique elements and outstanding vector illustrations. It is very complex and dynamic and the colors blend it perfectly. The menu bar is bold and unique and has a similar design as the logo. It is surely a great source of inspiration for both web designers and illustrators.

This beautiful vector illustration is part of a Pattern project created by a talented designer from NY. The color palette is bold and diverse and it could definitely inspire you in your next project. Check out his Behance profile for more vector pattern illustrations.

This amazing illustration is part of an Animal Series Illustrations project which will surely grab your attention. Beautiful, grungy textures are combined with clean vectors and create a creative, unique illustration of a four-handed animal that looks like a god. The details on this animal are very colorful.

Jonathan’s awesome work can be found on his Behance profile. The vector illustration above is one of the many vector illustration you can see in his portfolio. This particular one is part of a monster-themed set of vector illustrations. It is colorful and it will put a smile on your face the moment you’ll see it. There are 3 huge and happy animals in this illustration that seem to be stepping over a forest. One of them also yells “Boo”. The sun and other planets also have faces and they smile at you.

This is another vector illustration made by graphic designer Jonathan Ball. He is a freelance illustrator who loves to draw. The vector illustration above is part of an awesome illustration set named “Vectors eat toast too”. If you’ll take a look through this set you will surely notice this designer’s passion for funny abstract animal sketches. Each illustration is unique and colorful. Among his most famous clients are MTV, BBC sports, FHM magazine, Sony PlayStation, Microsoft and BBC Bitesize.

This awesome vectors drawing was made by Justin White. It is now printed and sold on T-Shirts, for both males and females. The t-shirts are printed with: plastisol ink, 6-color screen print and a chino additive for softness. If you like the illustration then check out how cool it looks on t-shirts!

This is another great example of how vectors can be used in creating beautiful photo manipulations. This example is colorful and contains many bright colored graphic elements.

Combine vectors and Photoshop to create awesome photo manipulations like this designer did. This project is called Fire and Ice and it will definitely inspire you. This illustration has the main character on the center of the page overlayed on a 2 colored background.

The Party friends is a cool vector illustration created by a very talented designer for BubbleFriends.de website. This illustration contains many funny and colorful animals and monsters that seem like they’re ready to throw a party. If you want to create a fun and creative illustration this is exactly how it should look like!

Sneaker’s Lover is a very creative illustration which shows how imaginative and talented the designer is. In this illustration, some small Addidas robbots are inspecting a sneaker. The design is clean and places the illustration on a simple light blue background. The logo is also well placed. If you’ll check out the link, you will find more awesome images from this project.  All of them are creative and they would be a great source of inspiration. 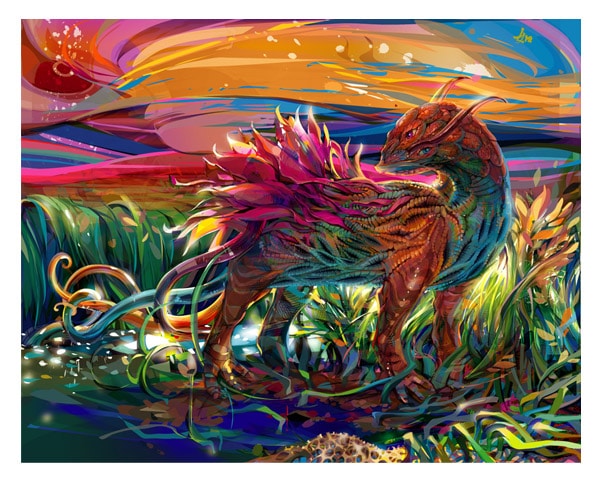 This is one great example of how inspirational vectors should look like. The designer imagined and created an unusual being, half animal, half plant and named it Agiratum. In the designer’s vision, Agiratum is a clever being, with colorful, pulpy petals and three tails. It has the capacity to sense the world differently and detect enemies from the distance. The very talented designer gives a detailed description of this animal-plant creature on his DeviantArt page. Check it out!

This amazing, magical illustration is part of the Animal Series Project. This example is very creative and you can add it to your inspiration album immediately. Check out the link for more inspiration.

Depthcore is an amazing vector illustration project with abstract drawings and vintage effects. This illustration is focused on an ample geometry and uses a large color palette. The color choices are really bold but they all blend in perfectly in this illustration. Check out the link for more items belonging to this awesome project.

Poum Poum World is a super-creative and imaginative vector illustration that is super fun to watch! It is colorful, and it has many funny characters. Pink poops, really?! 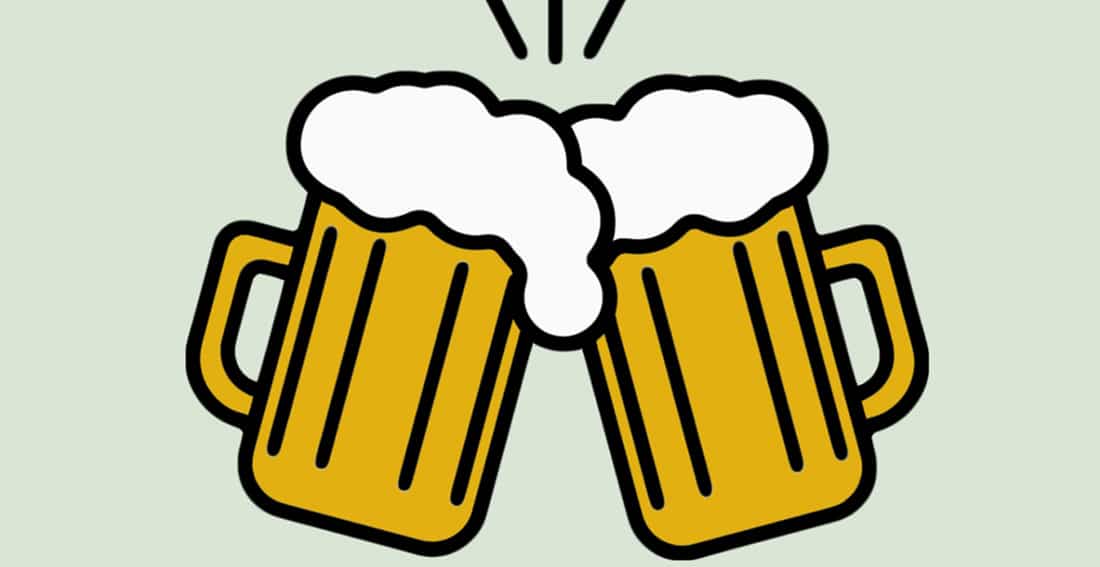 This Deviant artist says that creativity should be free, and thanks to that, we can now download this free vector beer mug. This free vector illustration uses flat design and it also inspires you to say “Cheers” more often. Although it is simple, examples such as this one have become more popular.

Fish Tank – I  think the image is pretty self-explanatory, the designer just wanted to take a common object and add a bit of a twist to it. This one represents a glass tank that was turned into the home of a golden fish.

Owl Boy is a cool, vector illustration with some really beautiful details such as the owls and the starry sky. It looks like it was taken from a cartoon movie.

This is an awesome poster illustration created for an Italian Magazine named „Blog Mag” in which you will definitely find your inspiration.

The vector illustration above is part of an assignment received by the designer. The theme was to define typo in his own way, in his own style. The designer saw typography as something fun, colorful and unique and he wanted to make the illustration suggest that fun mood. This complex illustration is surely among the best inspirational vectors on this list.

Barclays Real Retail Project is an isometric pixel art city illustration by Rod Hunt. This super complex illustration shows how talented and experienced this designer is. This is a great source of inspiration for all beginner illustrators.

The vector illustration above was designed by Bubblefriends studio. Sascha is an illustrator and artist based in Leverkusen, Germany. He graduated from the Department of Design at the University of Applied Sciences Düsseldorf in 2003. Sascha loves creating colorful vector illustrations and has fun enriching the world with always-happy figures and pictures. You can see this in his amazing work. 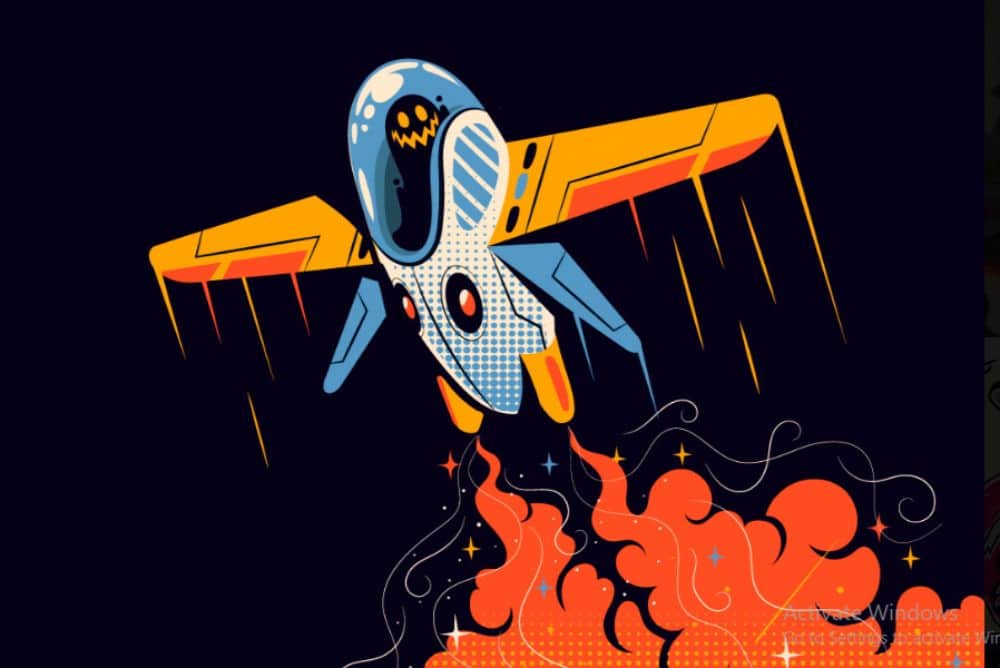 Last but not least, this is yet another good example of a creative illustration. This beautiful vector illustration was created by a very talented illustrator/designer.