The right backgrounds have the potential to accentuate the overall design. One such example is sky backgrounds. As a designer, time and again, you will feel the need for stunning sky images that you want to use as backgrounds in your creations.

Be it website header images or social media posts, or even print ads, the need for sky backgrounds is always there. To help you do your search for such backgrounds easily, we have compiled a good list of sky backgrounds that are free to use. Depending on your need, you can use the images as it or edit or crop them. Adding a simple overlay on top of them is also a good idea if you need to put text on top of it. 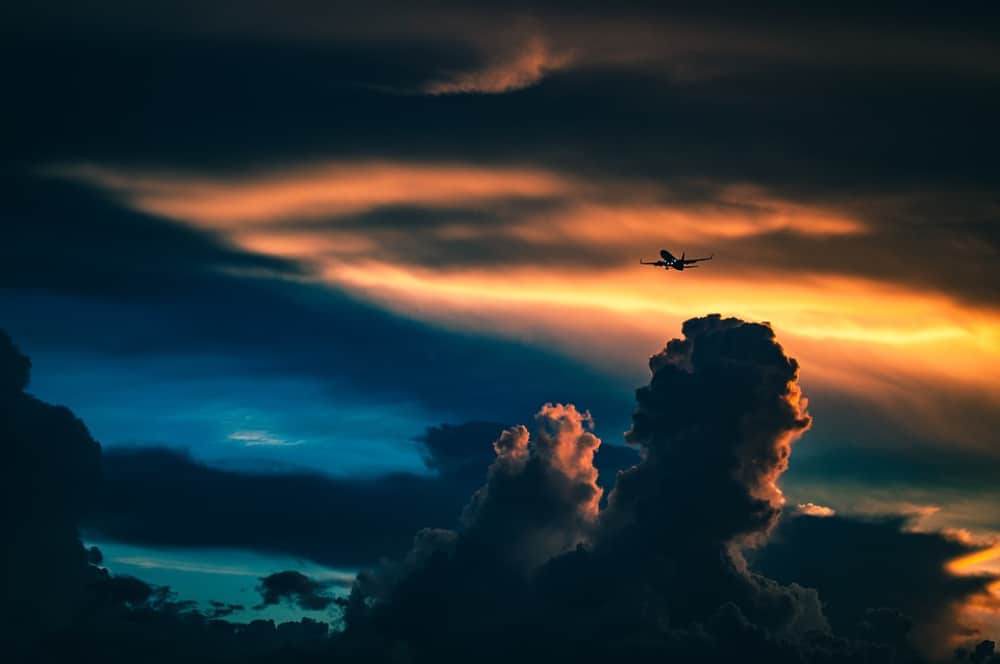 This sunset image is a very beautifully captured photograph of the sky. It contains natural elements such as the dark sky, clouds, and the airplane. The clouds look daunting and display a variety of shades. The sunlight is tearing through the clouds giving the image a natural look. This image can be easily used for travel-related creatives. There is a good amount of dead space on the left side, which can be helpful in case you want to set up the text on it. 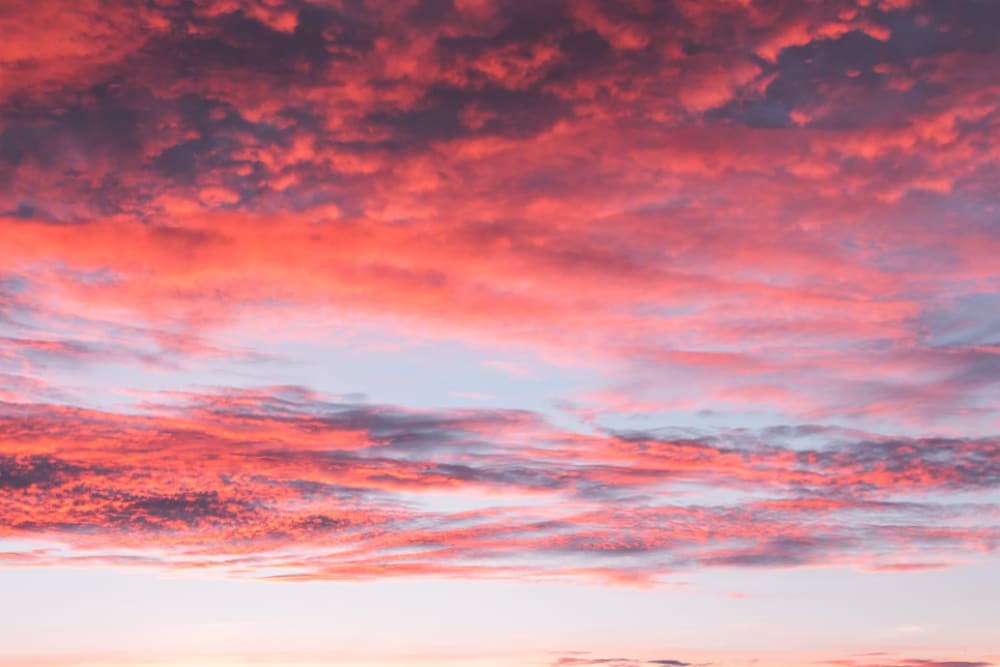 It is always interesting to see the variety of shades that the clouds display based on the time of the day and the sunlight incident on it. While the previous image had dark clouds, this image captures clouds with a reddish tone. It seems that the photograph was taken during the sunset period. The sky is completely empty except for the small series of clouds running across the image. Professional designers can take this image and change the shade of the clouds to whatever shade suits their needs.

3. Tree Silhouettes under the Sunset 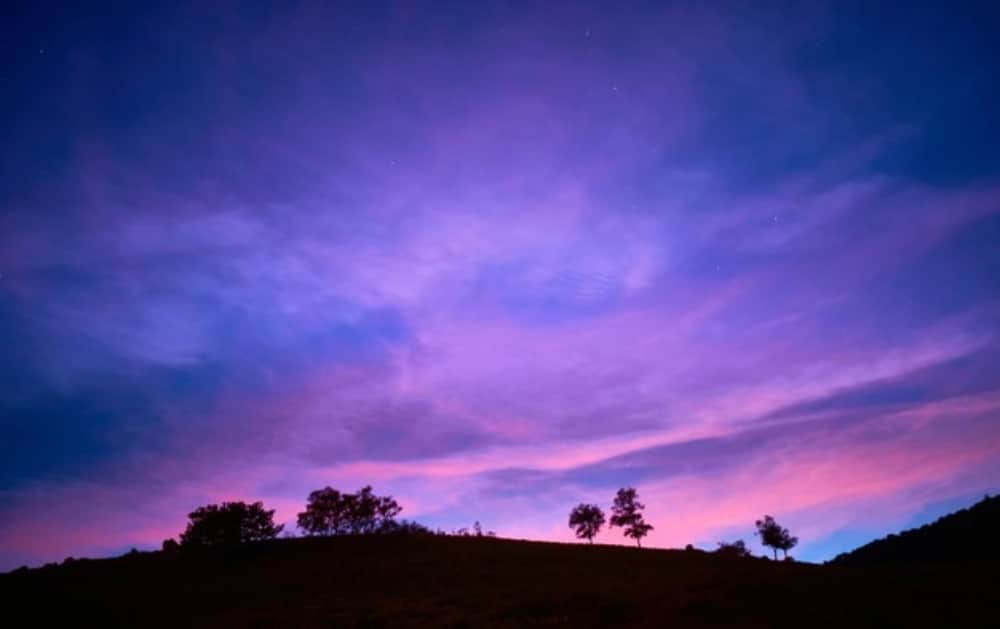 From the red sky, we move to an image that displays another vibrant sky. The sky in this image showcases a natural gradient of purple and pink. Captured from a wide angle, we can see a small hill and a few trees on top of it. There is a lot of blank space on the top, and hence this image can be very useful for designers as they can easily add their other graphic elements and text over there. The sky does not seem natural as the designer has heavily played on the colour balance part, but you can also tweak the shades to make the most of the image. 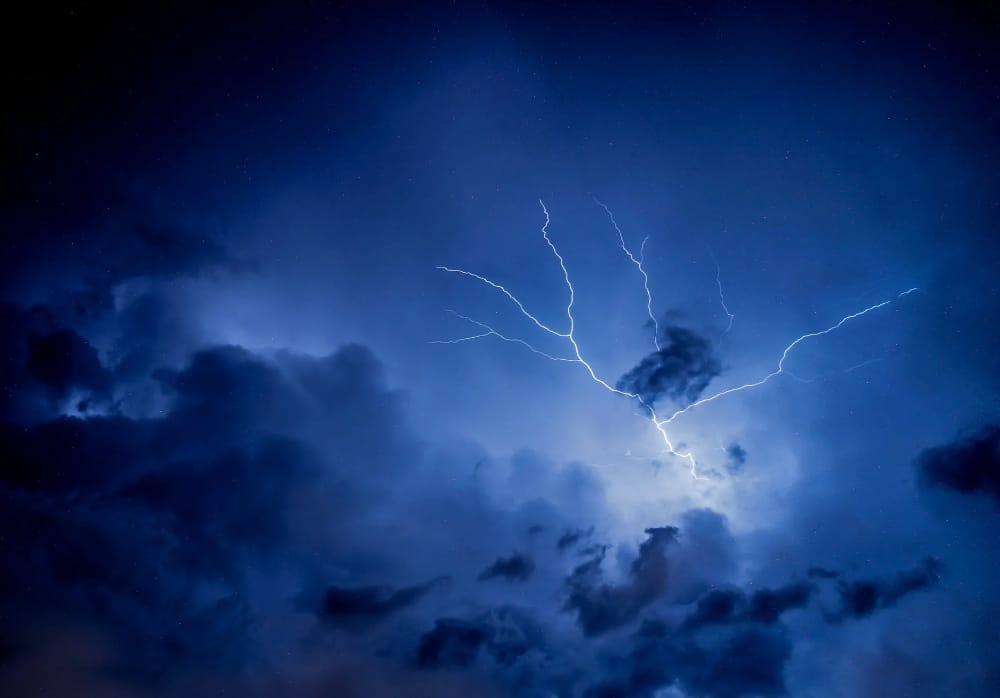 A classic photograph that captures lightning running through the sky loaded with clouds. Dark blue is the predominant shade of the image as the image seems to be of a night sky. Credit to the photographer who is able to capture the movement of lightning in the clouds in such a clear manner. We can see the sparking lines branching out across the sky, giving this image a unique and also scary look showcasing a classic thunderstorm. 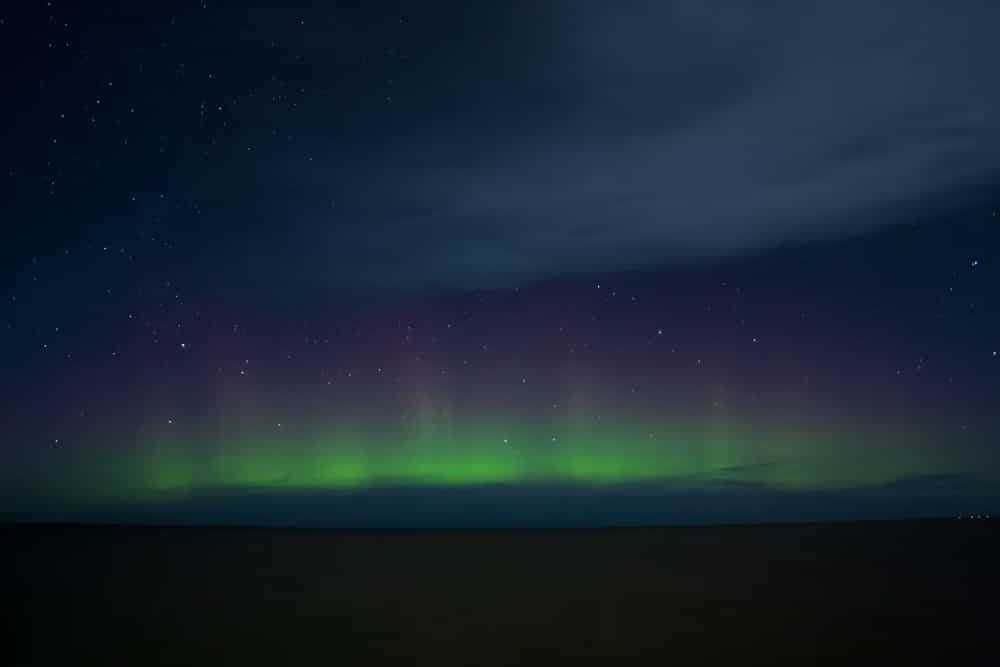 The collection of sky backgrounds would be incomplete without the image of the Northern Lights. Also known as aurora or aurora polaris, this phenomenon is visible around the Arctic and Antarctic regions. The disturbances in our magnetosphere caused by solar wind are the reason behind this beautiful phenomenon. This image captures one such aurora occurring across the horizon. We can see a fine gradient of light starting from dark blue and then going bright green and ultimately ending as purple. 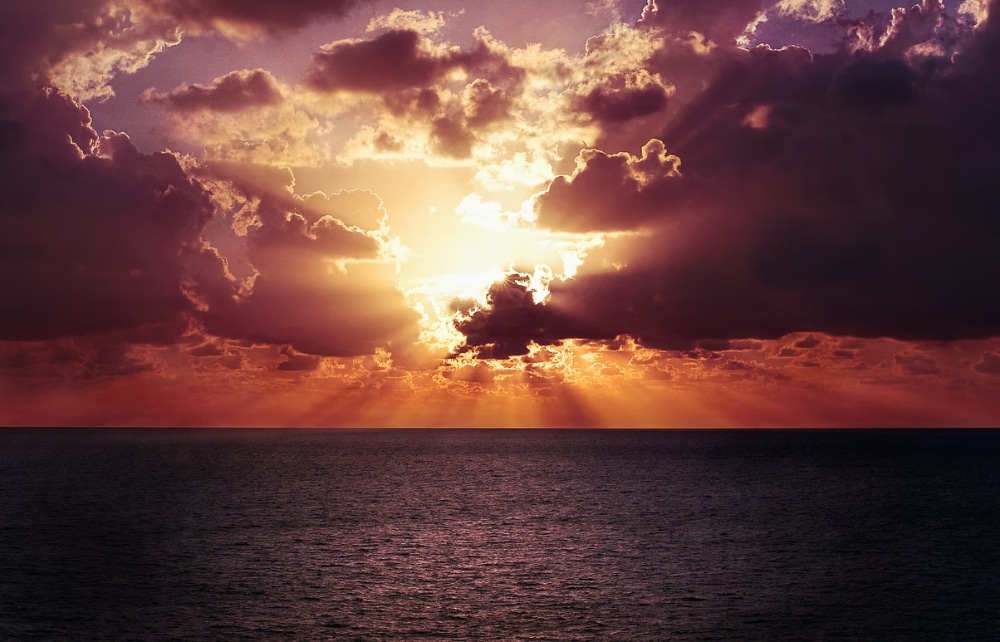 This classic sky image is something that you would have come across a lot of times. It shows a silent sea and white clouds over it. The sun is blasting through these clouds as we see the sunlight piercing through them. There is a sense of tranquility that this image has, and its symmetric structure makes it alluring. This image can be easily used as a quote image. All you need to do is add a small overlay and put the quote either in between the image or over the water. 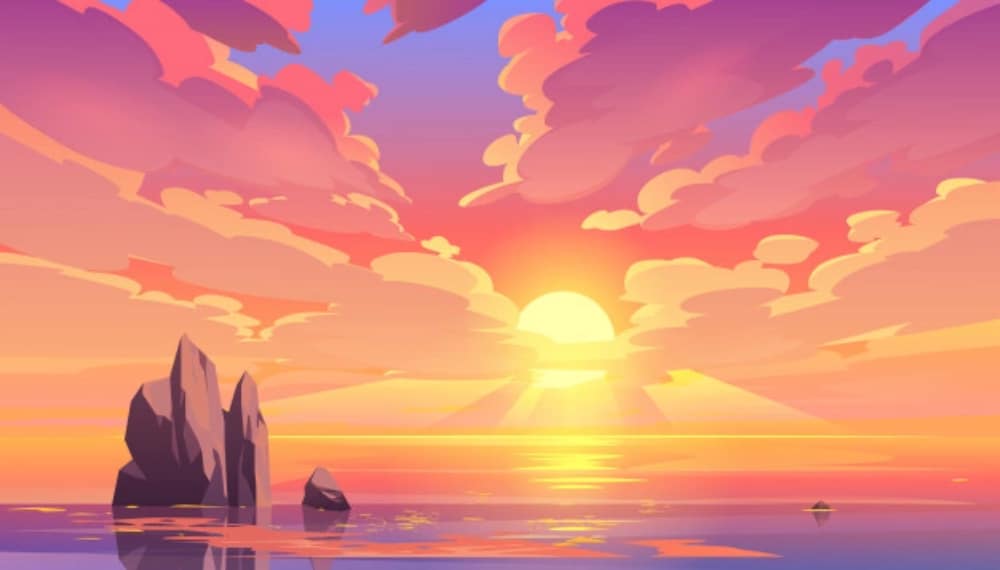 Moving away from photographs, this ocean sunset sky vector is a must-have for all designers. You can get its open file for free, and hence you can customize it as per your need. The image displays a sun setting in the background. The rays bounce across the clouds giving them a yellow glow. On the sides are cliffs and rocks bulging out from the sea. You can easily remove them if you want to use the image just for its sunset and the sea elements. 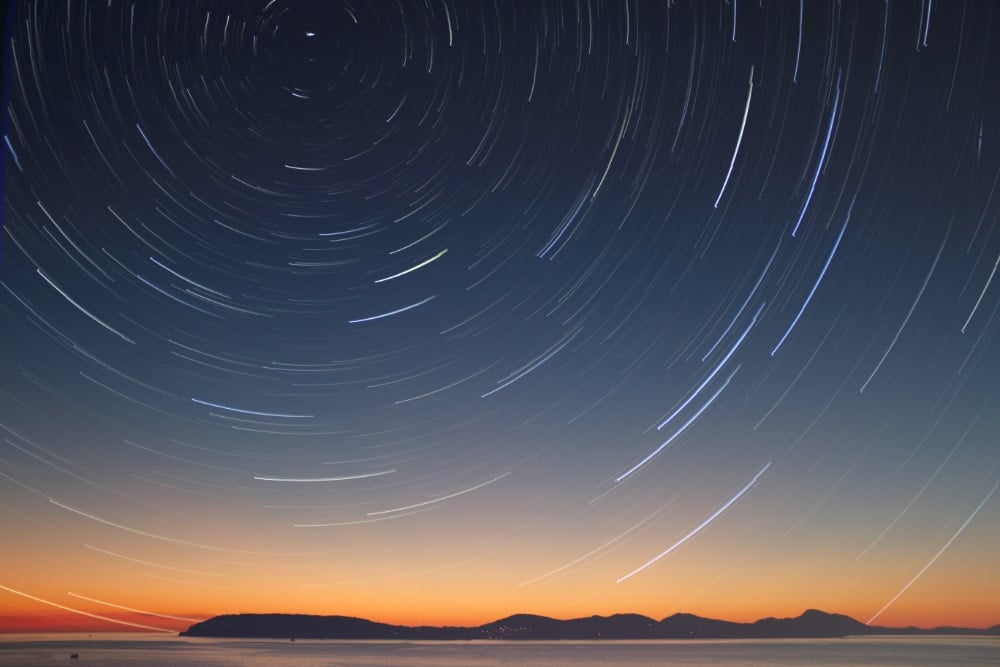 Capturing the stars in the night sky is any photographer’s dream. This beautiful image has done that but in a very good way. The sky and the stars take up most of the image space. There is a small plateau in the bottom rising above the seawater. The sun is setting behind this landmass, giving a beautiful orange gradient to the lower part of the image. The stars are captured in plenty, and the long shutter effect ensures a set pattern for them.

This sky background image with a family and a sunset is a classic stock image that all designers need to have in their collection. The good part is that there are no faces but just silhouettes of the family members. The sunset causes the entire image to be covered in yellow and black. The motion of the family members suggests that they are going into the water and are happy and enjoying themselves. Hence this makes this image highly useful whenever designers want to showcase that emotion. 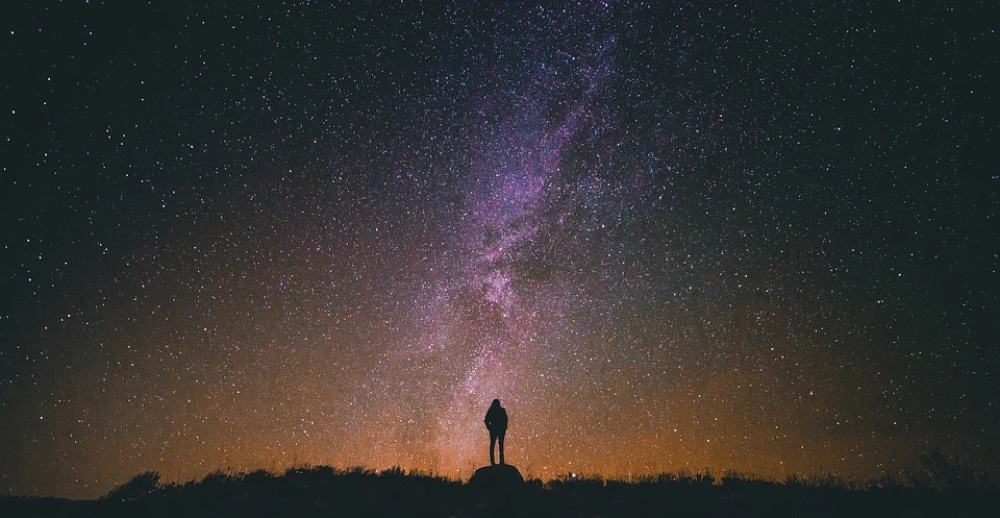 Thousands of stars sparkle in the dark sky while I stand tall to admire them – that is the key message of this image. The night sky with all its stars is beautifully captured in this photograph. The stars are shining bright and forming a pattern of their own. The ground is a bit lit up, maybe due to city lights. A person is standing right in the center, which shows the scale of the image. This image can be easily used for motivational quotes. 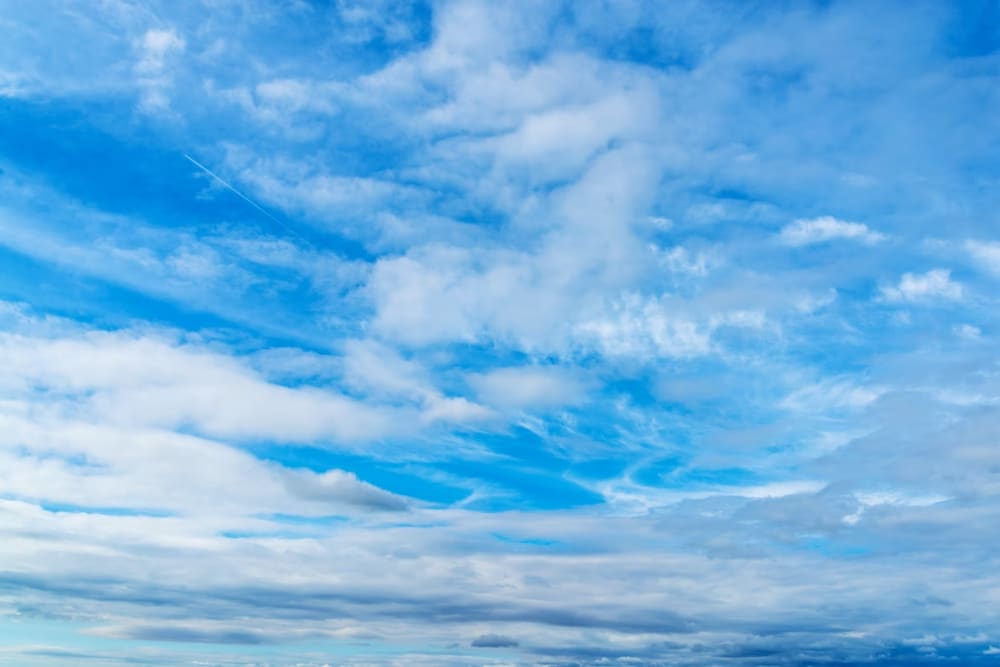 A blue sky filled with clouds is a perfect image that can help you anytime you are in need of sky background. Unlike the previous images, this image is very bright and offers a sense of optimism to the design. The rich blue sky can be seen in the background. In the foreground, there are clouds in irregular patterns. This irregular pattern is what makes the image more natural. This image is perfect for being used in background applications. 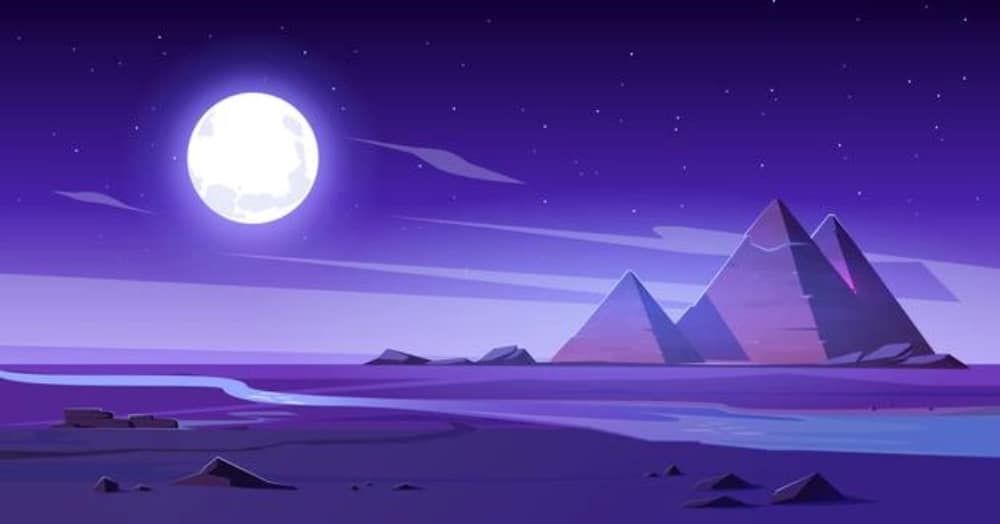 This is a good vector-based image that showcases the moonlit sky in Egypt. There are pyramids and a small water stream running beside it. The sky is shown dark violet to resemble the night sky, and many stars are sprinkled across it. You can get the editable file of this image for free and hence can make all the modifications you need. A good application can also be removing the pyramids and using the night sky as it is. 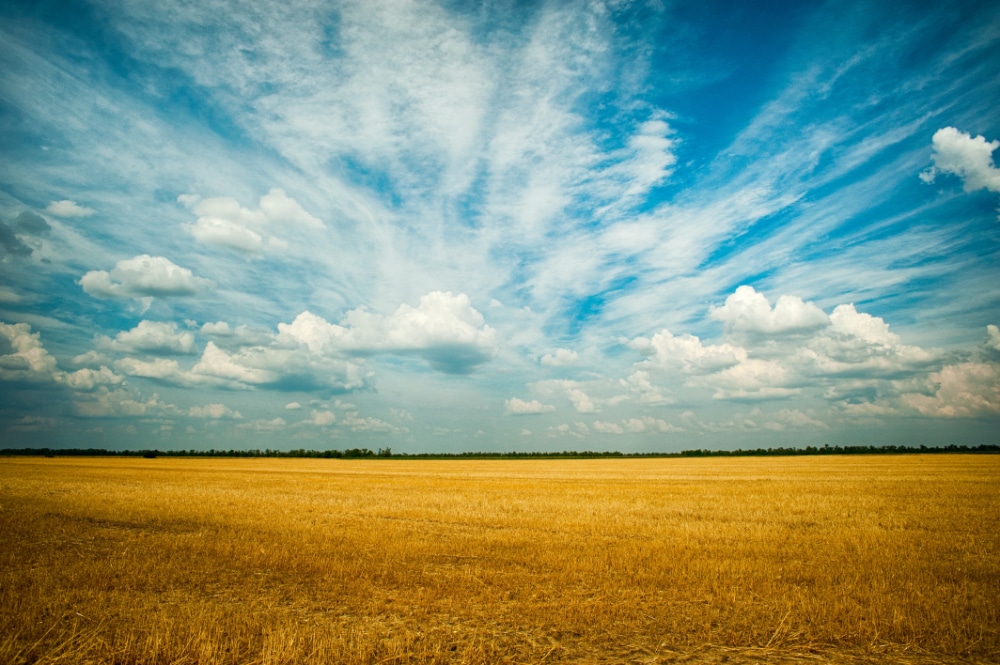 A very beautifully clicked photograph, this image would remind people of the Windows XP image. The beautiful sky is seen with a series of clouds and light cutting through them. In the bottom part, we can see a farm ready for harvest. The farm lends the much-needed yellow color in the image. There is plenty of dead space on the top and at the bottom, and hence this image can be used by designers for setting up additional graphics or text. 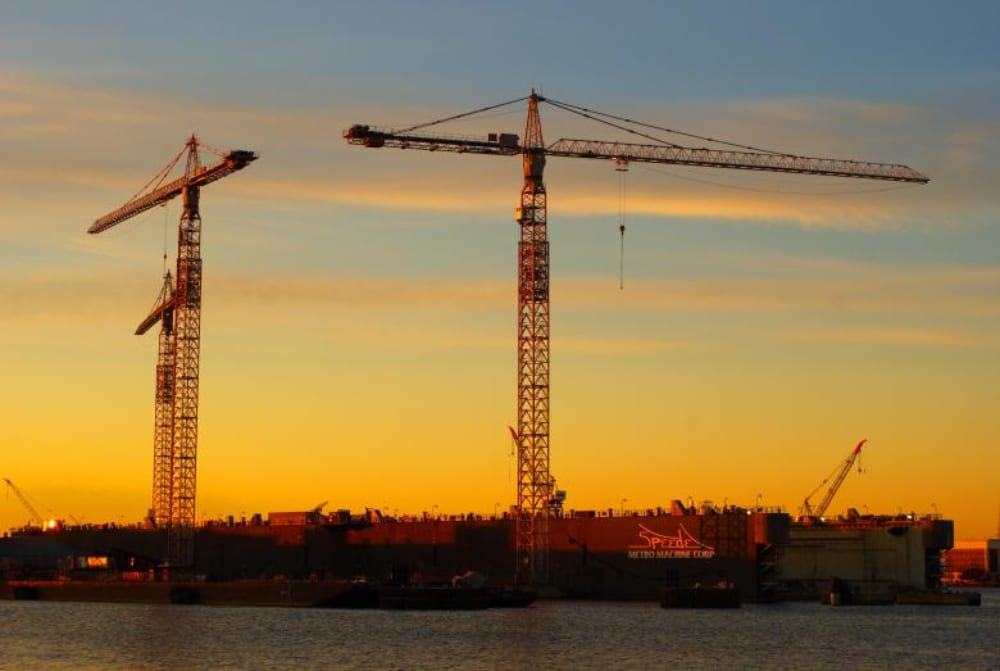 Not all-sky background images need to be about nature and beauty. This image captures the industrial aspects of human society with the sky in the background. We can see tall cranes working at a port. There are a lot of activities going in the bottom of the image. But the main focus remains on the crane in the sky. This image can prove to be very useful for industrial sectors as designers can use it quickly for websites or other digital marketing purposes. 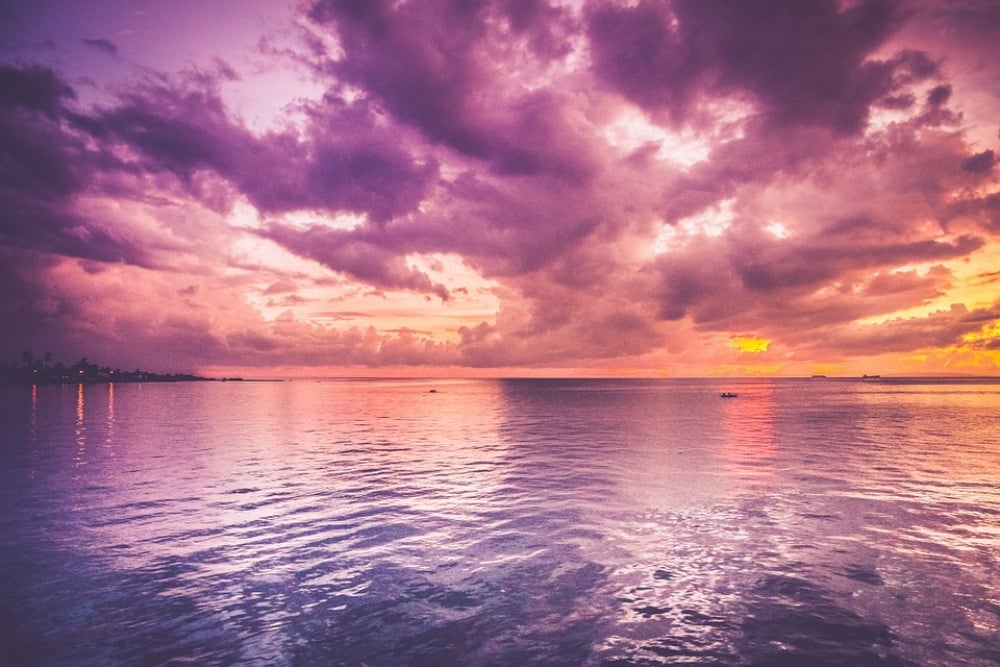 We have included blue and red colored skies in the collection, and now this image is a purple sky background image. The image as such does not contain much except for a large section of the sky filled with clouds, the silent sea, and a beach in the right corner with few lights on. The image’s main focus is the dark clouds captured in the shade of purple and the slight hint of sunset on the left corner. Designers can use the color balance in Photoshop to change the purple as per their needs. 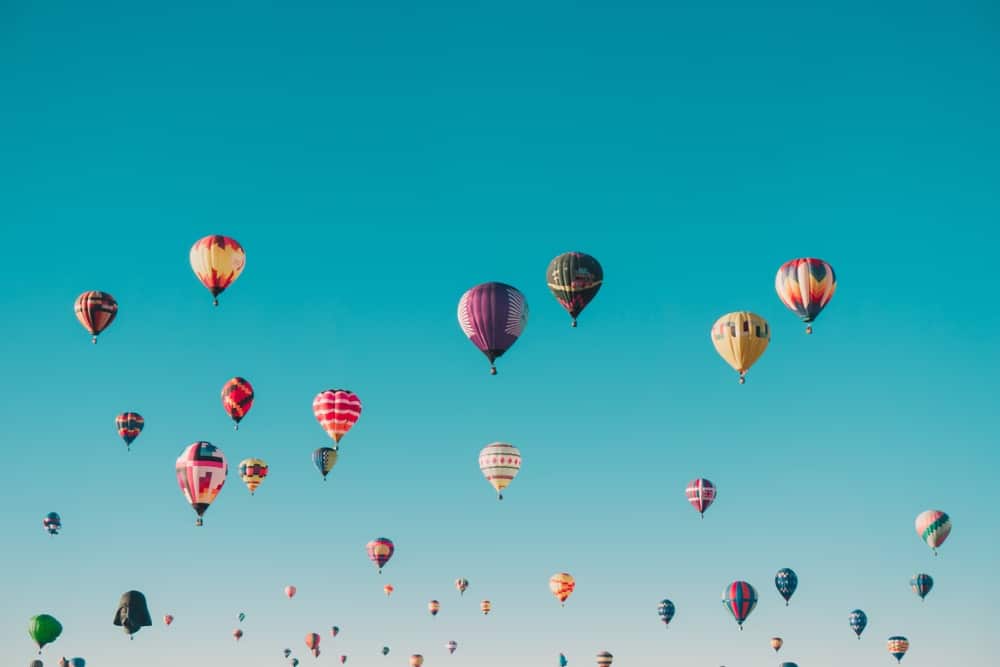 While we had many sky images with clouds in them, this image stands out because it has balloons. Not a sight that you come across regularly, the image captures a good moment of one of the balloon competitions in Europe. We can see a variety of colorful balloons across the sky. This image seems a perfect fit for travel-based applications. They can be used as hero images or website parallax images, or even for digital marketing.

We have ensured that we include a set number of vector-based sky backgrounds, and designers more than often need to customize backgrounds for their needs. This image captures the moon in its full glory. It is set well above the clouds and glowing well along with the shining stars. The clouds are given the right blending texture to make them look more realistic. Because you get the open file for free, you can easily tweak the background as per your design needs. 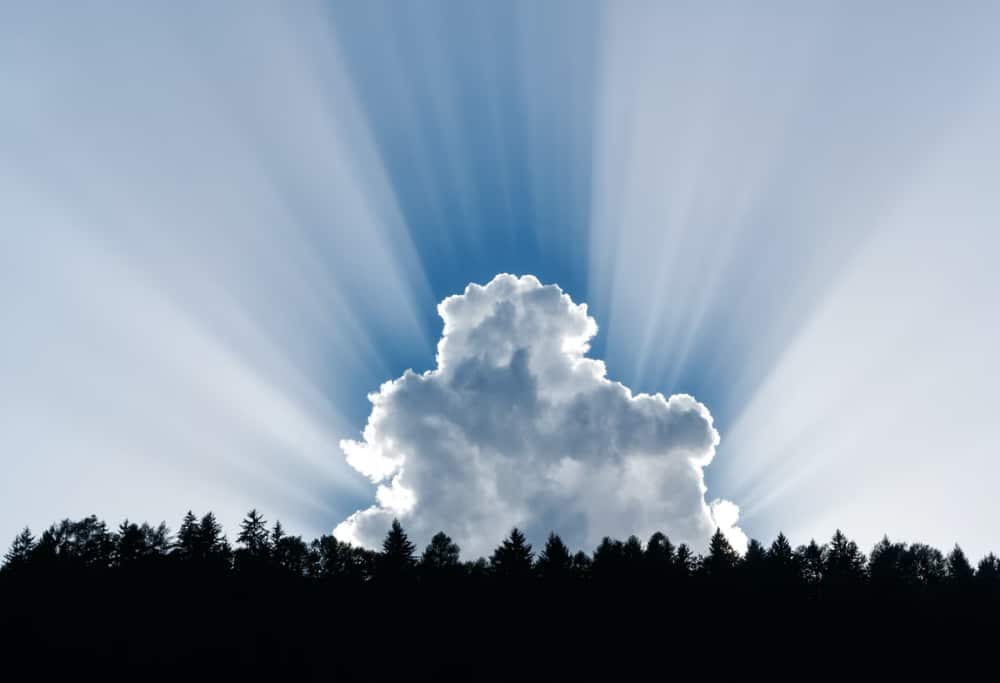 Another standard sky background, this image is a highly versatile background image, and hence it is a must-have for designers. The image captures a pine forest at the bottom and on the top is a single big cloud. The sun seems to be behind it at a distance as we can see light rays coming out of it in a pattern. The image seems well edited to make the cloud unique. Designers can use this image for multiple uses as a quote background or a website header. 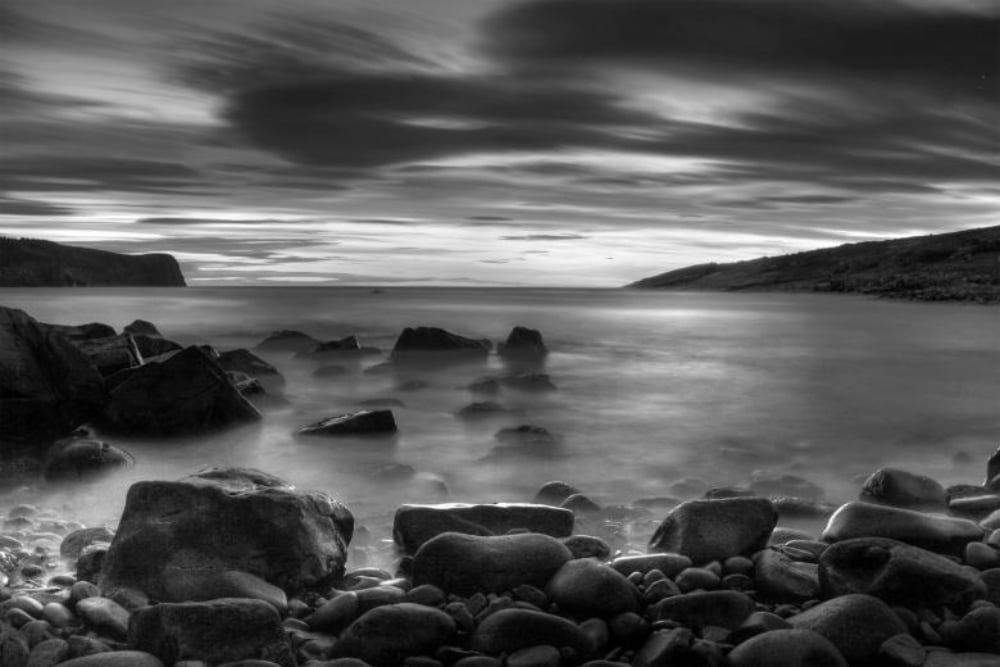 The sky need not be blue or purple to look beautiful. Black and white sky backgrounds also have a charm of their own. We see the cloudy sky in this image over a beach that is full of big and small rocks. The clouds seem to be traveling in the sky at a pace, and the photographer has taken the image with a longer shutter speed. The black and white feel of the image makes it look classy and versatile. 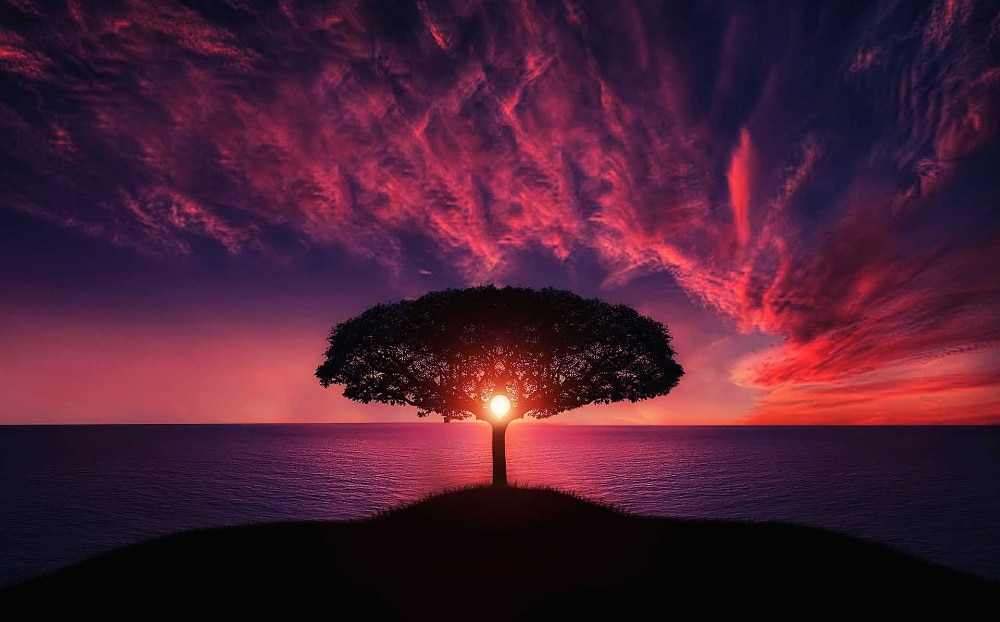 Saving the best for the last, this image is one of the best sky backgrounds that you would have come across. The photograph is taken with a very well-set frame and also timing. The sun is setting, and that is captured when it is right in the middle of the tree. The tree branch symmetry adds a good balance to the image. The sky is filled with clouds that alter the shade of the sky. The water behind is still, and we can see small ripples flowing. The overall dark purple colors make the image very vibrant. Designers should add this to their collection and use it to make a good impact on their creativity.

All the above sky backgrounds are free to use, and you can get either an editable open file or a high-resolution image of the background. It would be a good idea to collect a variety of them as time passes, and again designers would need to use them maybe in websites, social media posts, or other marketing materials.