Halloween is only a couple of days away, and I thought I would compile a showcase of Halloween based artwork to inspire you.This showcase is made up of illustrations, vectors, drawings, and photos. Let me know what one you like best, and what one you think is the scariest.

If you have any more you would like to add to the list, or any ideas of Halloween posts for the rest of the week, let us know via email or feel free to drop us a comment below.

This awesome advertisement for Bacardi was created by Indigo Studios. They created the background first, printed it and used it for the shooting. It was created especially for Halloween. It looks professional and really creepy!

This is an awesome illustration for Halloween. It looks like an image from a game. It is dynamic and it would definitely scare people on this holiday.

This awesome Angel & Demon illustration was created using amazing Photoshop skills and photo manipulation techniques. This example can be used as an inspiration for creating awesome Halloween illustrations! You can try out this technique and improve your photoshop skills!

This is a really nice Halloween illustration designed by IreneHorrors. The elements look hand-drawn and the grey color palette is a great detail. The red gargoyles are also a nice touch.

If you’re a fan of this holiday, then you’ll definitely want to have a look at this illustration. Art of Horror was created for “Halloween Castle Frankenstein”, a Horror-Live-Event that usually takes place in Germany. In this event, people adventure into surviving a horror castle!

Do you like cartoons? This is a very cool Halloween illustration with a very detailed vector character. It has its inspiration in anime characters. The scary character holding a Halloween pumpkin looks really nice and you can easily see that someone put a lot of effort into designing him. The background picture is also nice and blends in perfectly. The result is quite amazing and unique.

Just like the illustration you have seen earlier, this illustration was created for “Halloween Castle Frankenstein” a Horror-Live-Event in Germany. If you’ll dig in more into this event, you’ll find many scary Halloween posters.

This one is another great illustration created for “Halloween Castle Frankenstein” a Horror-Live-Event in Germany. Check out the link for more inspiration.

Crafty Little Demons has a witch as the main character for this illustration. It was done by IreneHorrors who is quite a fan of Halloween. She has a dark red dress that looks great on that light grey background. The witch is surrounded by “crafty little creatures.

This looks cute rather than scary. The color palette this illustration is based on is very nicely chosen. The character, details, and background mix well together and they make a really nice thematic illustration.

There’s no fun without Jack O Lantern! This is another fun and cute vector illustration created for Halloween. It’s not that scary but it is an inspiration for some more child-friendly Halloween-thematic illustrations.

This nice drawing was created by a very talented artist who definitely worked hard to create this awesome example. It’s not vectorized but it could be a base for a really nice thematic graphic illustration. You should definitely check it out and who knows, maybe you’ll start drawing your next project immediately.

This is an Anime kind of illustration with a Halloween theme. It has a main character and a very detailed abstract background. 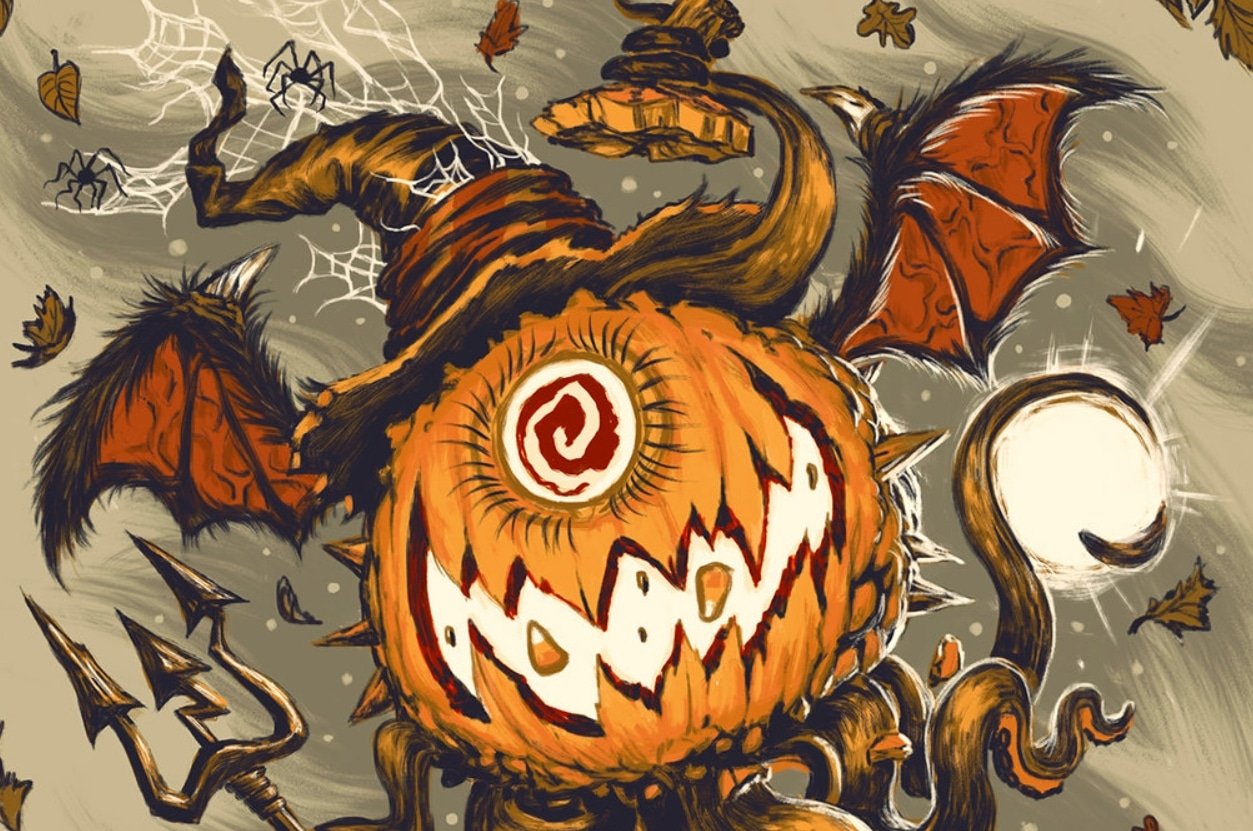 A lot of effort was put into designing this phantom gourd. The color palette is nice and so is the illustration. This phantom gourd supposedly came from another realm to bring the Halloween holiday upon us!

What I like most about this awesome Haloween illustration is the way the characters were created. They have something really unique. Probably it’s their huge eyes.

This one is kind of scary but it is great for a Halloween graphic project. The grungy, rusty background is a really nice detail and creates a macabre atmosphere.

This looks like Sailor Moon was taken from its cartoon and placed in a Halloween land. It is nowhere near creepy but it makes a great Halloween illustration.

This is a great Halloween illustration. It is perfect to be used as a desktop wallpaper during this holiday.

Last but not least, this example is great and it can be a really good source of inspiration. This is a nice pumpkin lantern illustration with some cool glowing effects.

1 thought on “20 Scary Halloween Based Artwork”