It will even be an understatement to say that WordPress has revolutionized the website development sector, given the prominent dominance of this platform. The primary reason for its widespread popularity is that it is an open-source platform and started to provide people a robust platform to create their blogs and websites to communicate with the outer world. Over time, it has kept evolving itself and shaped the website development trends. The latest Guttenberg update is an example of it.

Table of Contents hide
1. WordPress drives almost 42.5% of the internet worldwide:
2. In terms of CMS, WordPress has a market share of 64.6%:
3. WordPress is way older than Facebook and Twitter:
4. “WordPress” term is searched over 3.1 million times every month:
5. WordPress had a different name when it started:
6. WordPress pioneered the remote working culture:
7. WordPress has an unspoken connection with Jazz music:
8. Guttenberg is in honor of Johannes Gutenberg – inventor of the printing press:
9. WordPress would have taken an effort of 382 person-years to build:
10. WordPress is released under an open-source license:
11. No one owns WordPress, and it has no CEO culture:
12. There are more than 59,000 Plugins available for WordPress:
13. There are more than 123 million WooCommerce users:
14. Makers of Avada Theme earned 40 million dollars through theme sales:
15. WordPress developers get paid up to $63,375 in the US:
16. 49% hacked WordPress websites were found running on an outdated version:
17. Over 84% of WordPress websites use Google Analytics for tracking:
18. WordPress websites account for over 90% of hacked websites:
19. WordPress is available for 72 languages:
20. So far, 1080 WordCamp events have been organized in 371 cities in 65 countries:

From being a website development platform, it has now transcended into creating an industry of its own. There are thousands of WordPress themes being created, and more plugins and add-ons are released almost every day. WordPress itself has become a multi-million dollar industry with millions of people depending on it across the world. It is interesting to know more about how this WordPress platform started and other facets related to it. We have compiled here a list of 25 things you didn’t know about WordPress: 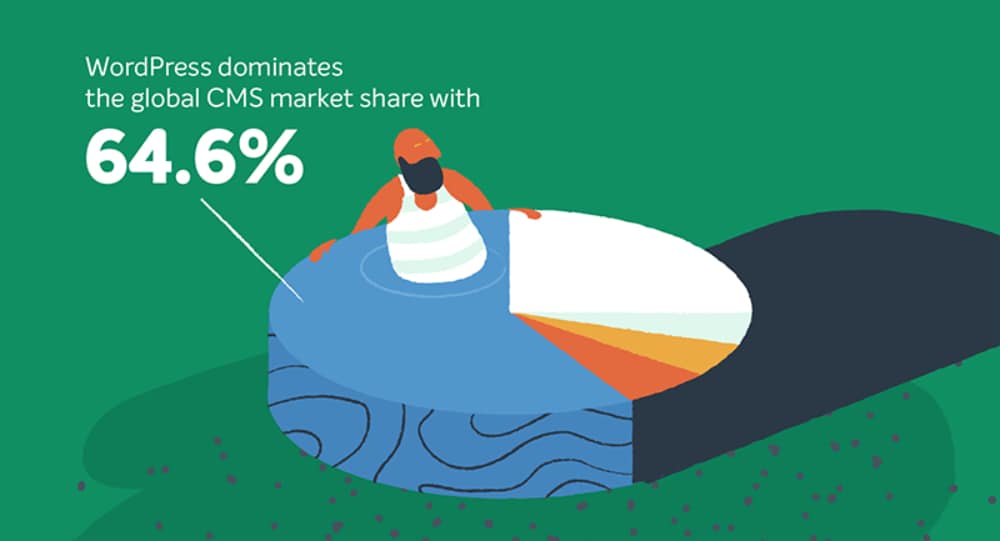 WordPress is hands down the most popular Content Management System. And the important point to note is that it is far far ahead of other competitors. Over 500 websites are made on WordPress every day. The second position goes to Shopify, which holds only 5.4% market share. In other markets, this would have become an unhealthy monopoly. Still, because WordPress is open-sourced and not aimed to profit, these inequalities have not hampered the website development sector. 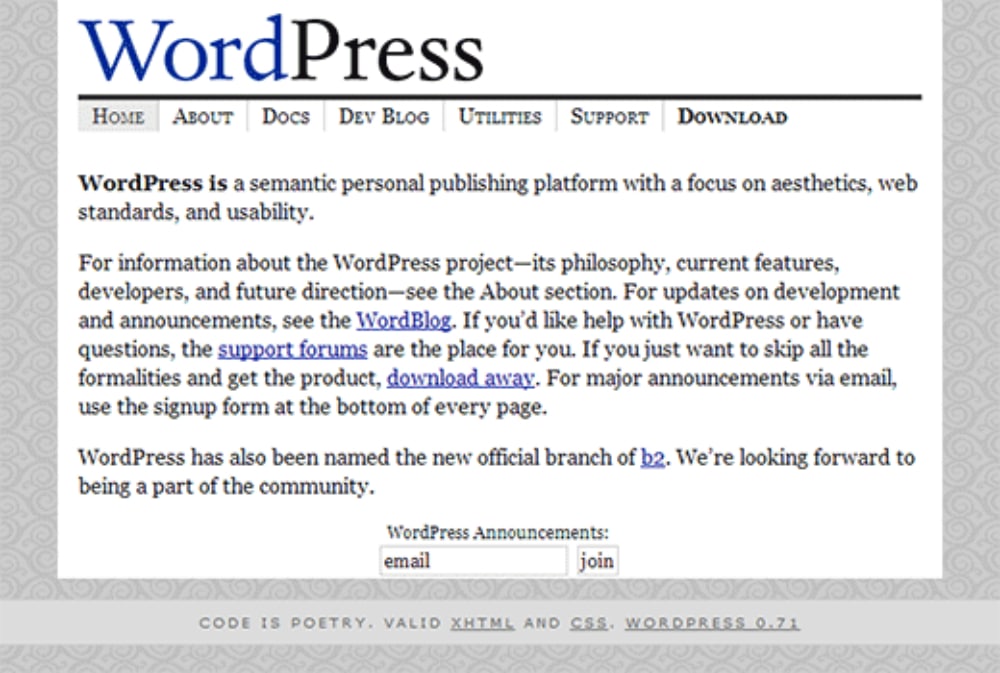 Not many would be aware that WordPress was born way back in 2003. Its first version was released on 27th May 2003. Facebook had its initial version running in 2004, and Twitter commenced in 2006. Interestingly, they were based on the same foundation of providing a platform for people to communicate through the internet. Over time, the latter two companies became tech giants churning billions of dollars, while WordPress remained loyal to its core and still continues to serve as a nonprofit open-source platform.

4. “WordPress” term is searched over 3.1 million times every month: 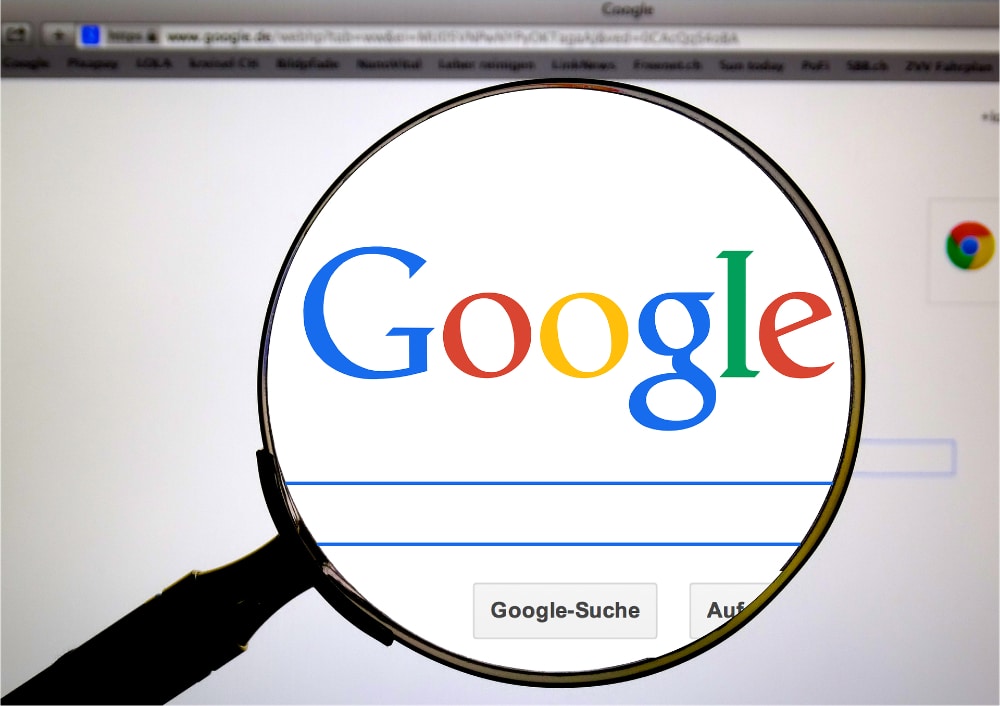 Another validation for WordPress’s popularity is that it is searched 3.1 million times every month, according to the SemRush report. This is way ahead of any content management system or other website development platform. The prominent reason for such a high number is how WordPress has grown into a big industry with so many people depending on it. There are new themes, plugins, and other add-ons being created almost on a daily basis.

5. WordPress had a different name when it started:

What we know today as WordPress was originally a project called b2/cafelog created by Michel Valdrighi. It saw a bit of success as over 3000 websites started using it. Eventually, it was transformed into WordPress by 19-year-old college students Matt Mullenweg and Mike Little as an offshoot of b2. Matt’s friend Christine Selleck Tremoulet and a co-developer, suggested the name WordPress, which is how the brand evolved. 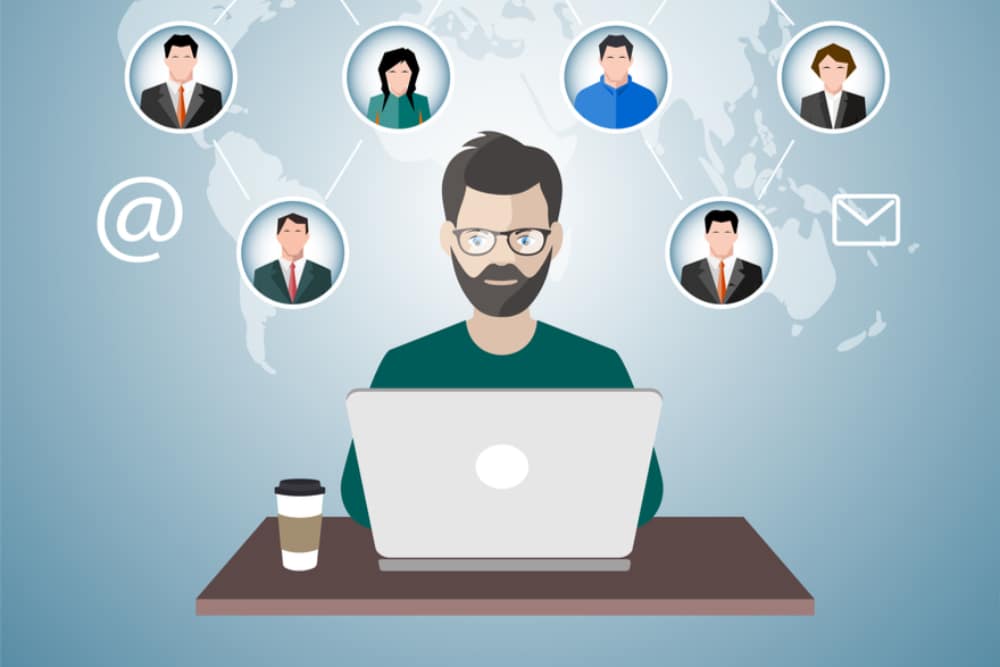 While remote working or work from home is a common practice today, back in the 2000s, it was totally frowned upon. WordPress went against this notion and had been working with the remote location concept since its early days. This gave it the freedom to have contributors from across the globe. On the other hand, developers were inspired by this new freedom and were able to contribute in a much better way. The work culture was very relaxed with flexible timings and no target pressure – something many IT companies are trying to replicate now.

7. WordPress has an unspoken connection with Jazz music:

Do you wonder how WordPress names all its updates? Then you should look for top Jazz musicians. The developers of WordPress are fans of Jazz music, and they have their unique way of paying tribute to them. This started in 2004 when the first WordPress version was given the name ‘Davis’ in honor of the legendary Jazz musician Miles Davis. Post that, John Coltrane, George Gershwin, and Duke Ellington are some of the other Jazz artists who have had updates named after them.

8. Guttenberg is in honor of Johannes Gutenberg – inventor of the printing press: 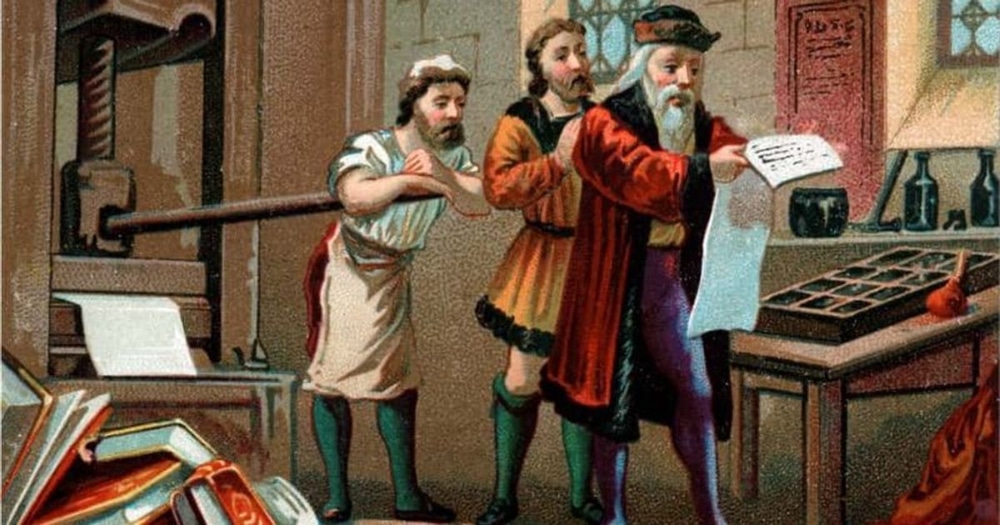 The latest and the most audacious update of WordPress has been called ‘Gutenberg.’ This update introduced many new editing and publishing tools, thereby providing more creative freedom and ease of working to the users. This big update has been named after the inventor of the printing press – Johannes Gutenberg. Considering themselves as the pioneers of online press, the developers have paid homage to him in their new update.

9. WordPress would have taken an effort of 382 person-years to build: 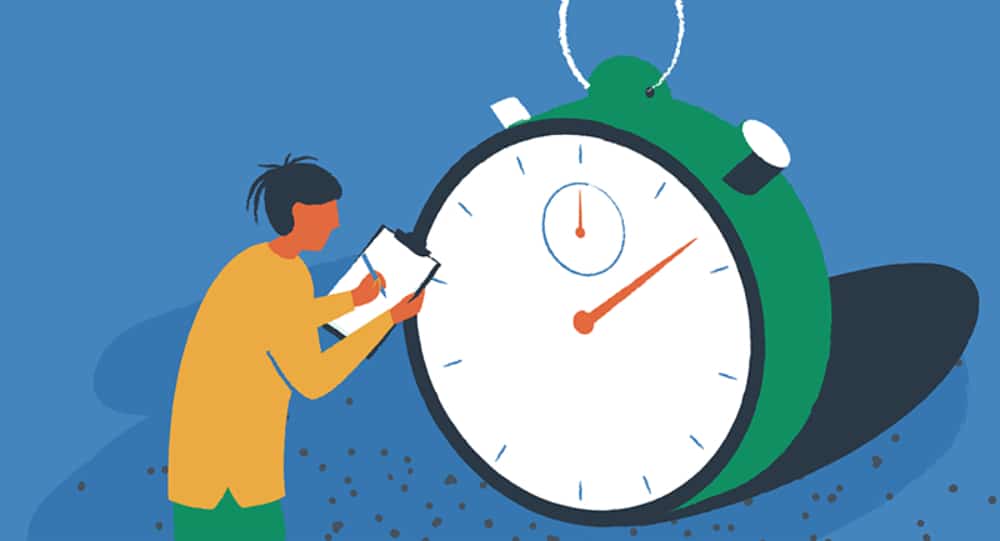 WordPress may seem simple and easy to use from the outside, but it is built of highly complex long codes from the inside. As per Open Hub’s Project Cost Calculator, it would take over 382 person-years, millions of lines of codes, and tons of coffee to get to the WordPress version we are using today. So from a cost point of view, it would have easily been over six million dollars. But the good part is that it is available free of cost, thanks to the community of dedicated developers that are helping build it.

10. WordPress is released under an open-source license: 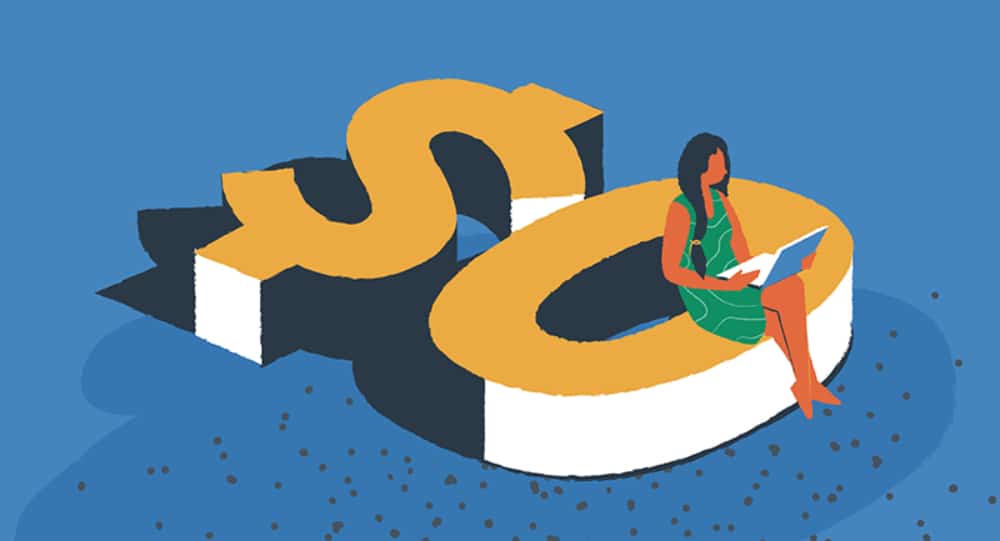 The digital world we see today would have been very different if the makers of WordPress had decided to earn out of it. The good part is that WordPress is released under an open-source license, the GNU Public License (GPL). This means that anyone anywhere in the world can download the source code and use it. Unfortunately, this means that WordPress costs you $0! But that does not mean that WordPress websites are cheap; there is still a lot of development work that goes into it.

11. No one owns WordPress, and it has no CEO culture: 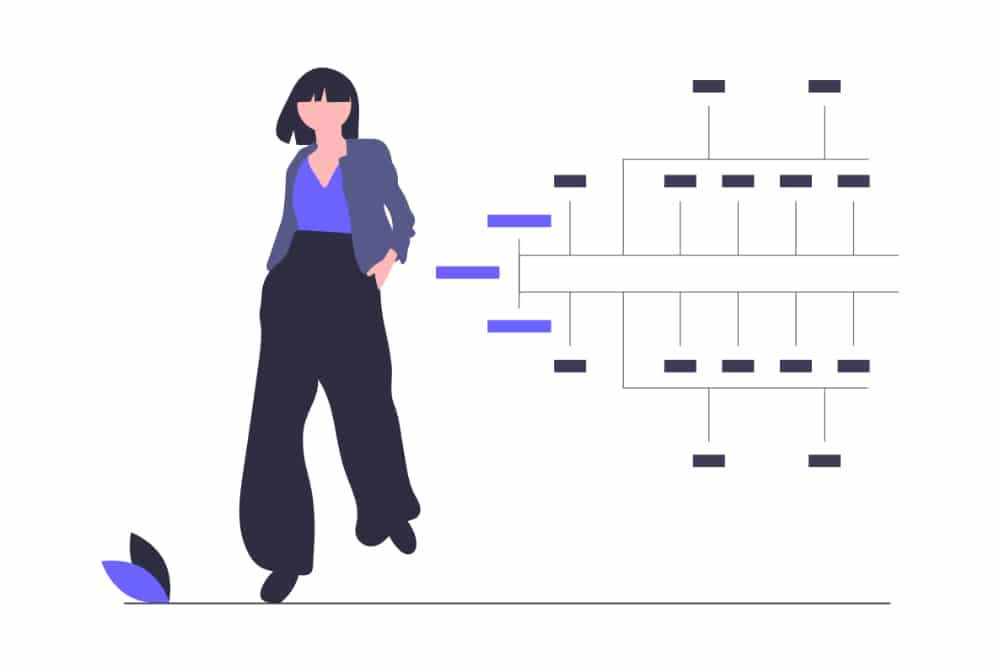 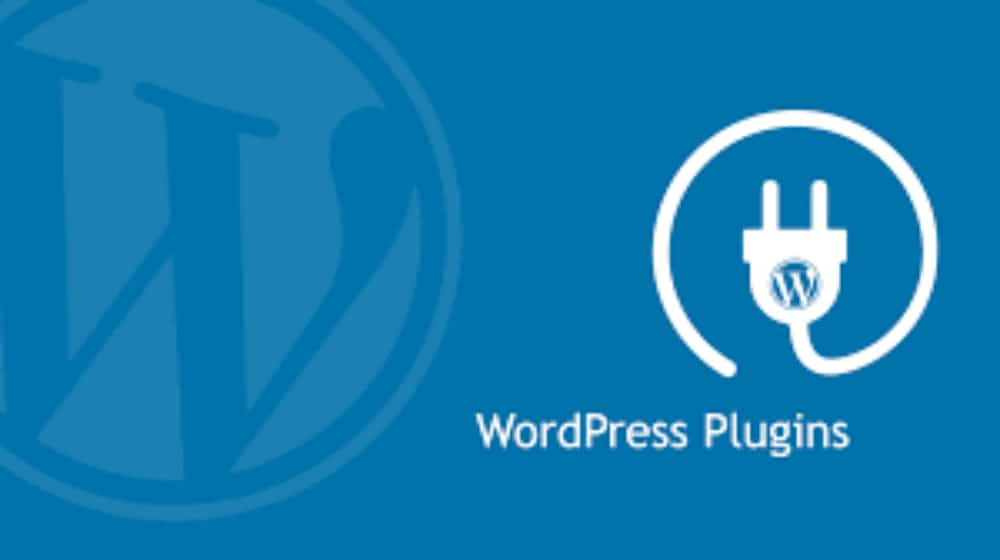 Plugins form an integral part of WordPress websites. They are used to give life to websites, from sliders, contact forms, and buttons to online selling. For anything major, you will need a good plugin. Initially, there were a limited number of plugins, but there has been a huge boom in plugin development since the last few years. At present, there are more than 59,000 plugins available for WordPress users, and this number is growing on a daily basis.

13. There are more than 123 million WooCommerce users: 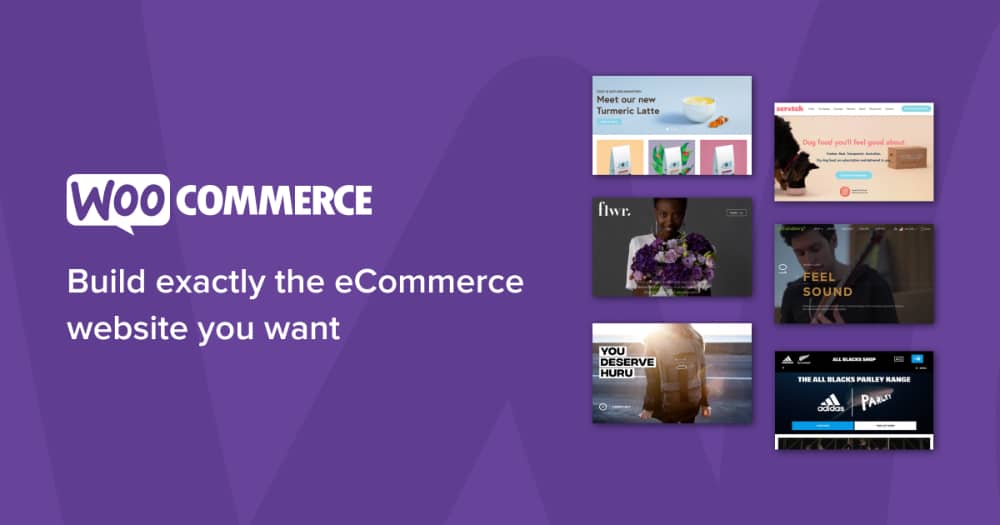 Another product from the WordPress world is WooCommerce, which provides a platform for users to sell products or services online. It is estimated that presently there are 123 million WooCommerce users. A lot of platforms similar to WooCommerce have been developed and launched, but nothing has ever gotten close to the popularity of WooCommerce. It is amazing to see how this free platform empowers millions of users worldwide to become global sellers. 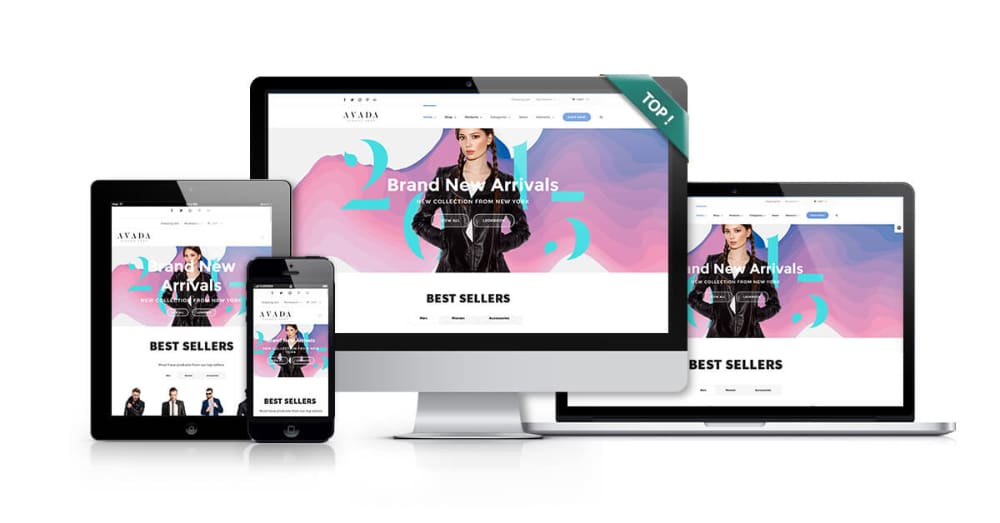 Avada is one of the most popular themes at the moment. To get an idea about the scale of the industry based on WordPress, Avada has earned over 40 million dollars by selling the theme. Costing $59, the theme has been sold over 670,000 times on the marketplace. This is something that will inspire developers to create WordPress themes and sell them. Presently there are over thousands of themes available. While some are generic themes, there has been a growing trend of developing themes specific to sectors, thereby providing the right set of tools to create websites for that particular sector. 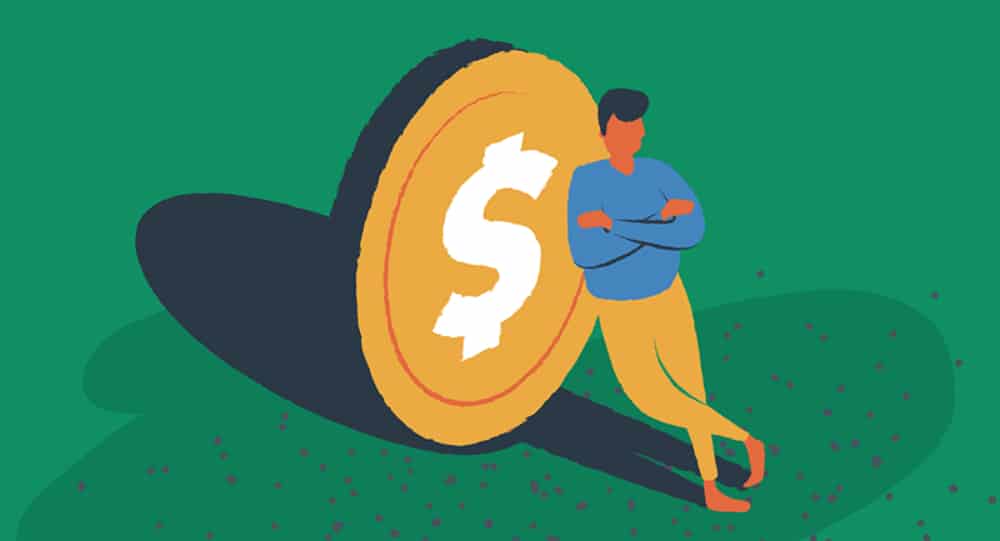 As per Talent – a prominent job search website, WordPress developer is a talent that is highly sought after in the US and even worldwide. Presently the average salary of a WordPress developer in the US is $63,375. That is quite a good number! Given the ever-expanding world of WordPress, this number is going to rise going forward and hence presents a good opportunity for young developers. However, with the rise in outsourcing, a lot of development jobs are done in South East Asia.

16. 49% hacked WordPress websites were found running on an outdated version:

The most common advice that WordPress developers get is to ensure that their website runs on the latest version and all the plugins are well updated. However, only 23% of WordPress users run on the latest version. As per W3Techs, 27% of all WordPress sites still use version 5.2, while 12% are still stuck on version 4. No wonder so many WordPress websites get hacked so easily.

17. Over 84% of WordPress websites use Google Analytics for tracking: 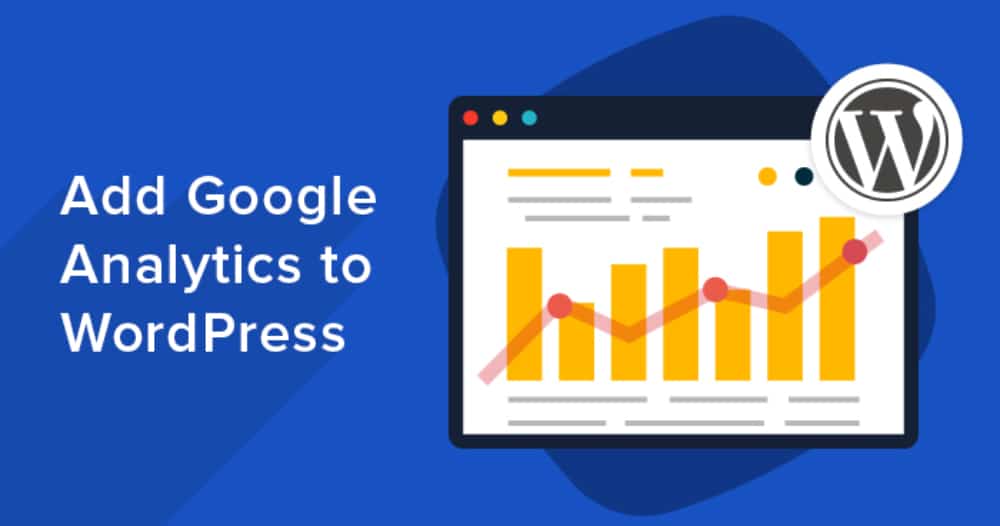 This statistic is an encouraging number as it gives us an idea of how people understand traffic’s importance. A whopping 84.2% of WordPress websites have set up Google Analytics and are keeping a tab on their inbound traffic and user end metrics. On the other hand, it also suggests how WordPress is compliant with Google crawlers and works well with them. 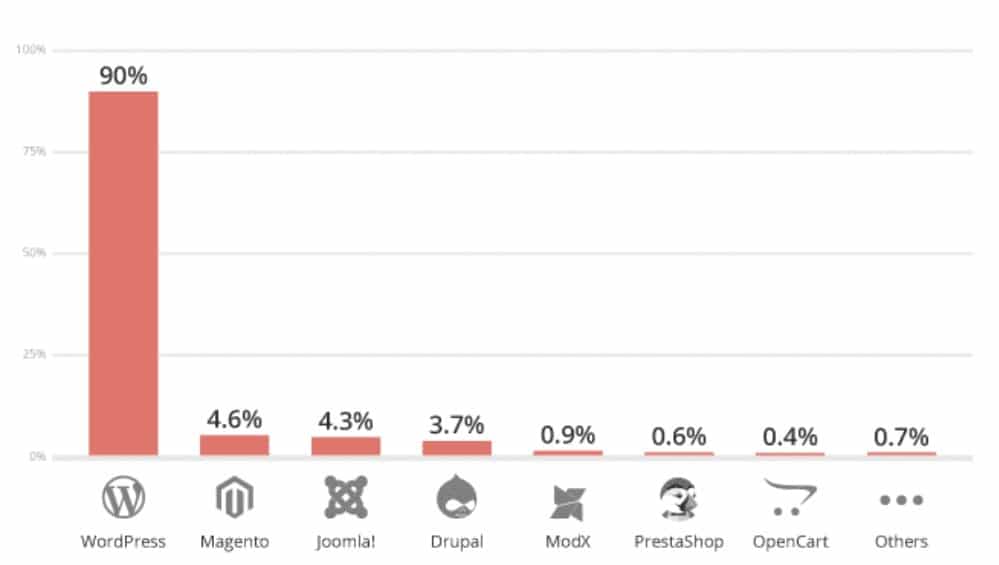 The notion that WordPress websites are not secured is not completely misplaced. According to Sucuri, a leading security tool, over 90% of website cleanup requests they received were from WordPress websites. The second highest was 4.6% of Magento. The main culprit is developers not updating their WordPress version or using outdated plugins or add-ons. Over time, with more tools and better awareness, we hope this number comes down.

19. WordPress is available for 72 languages: 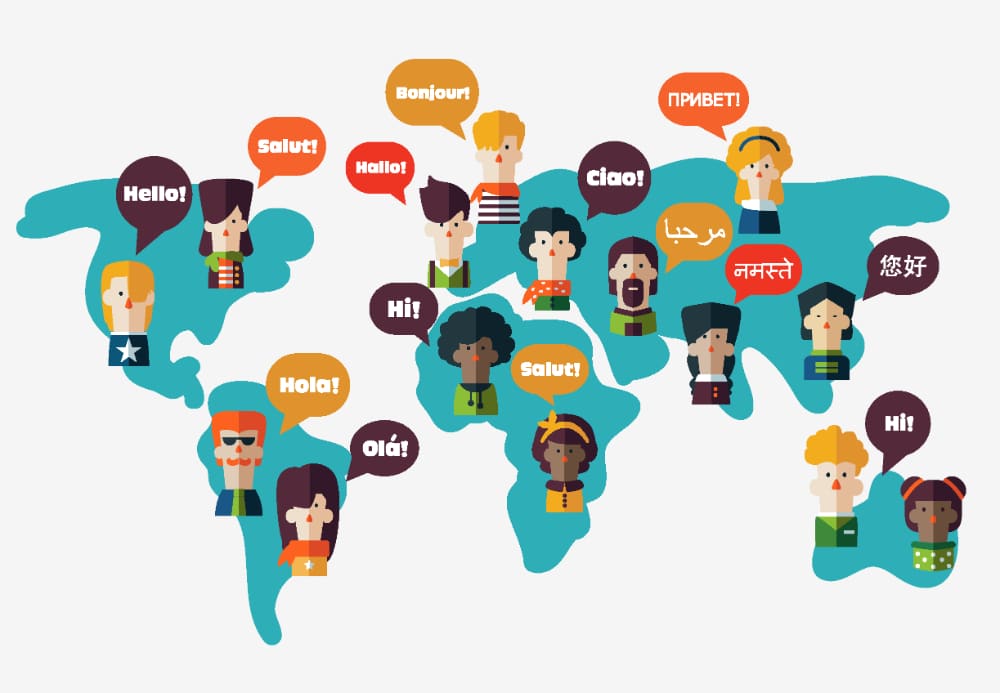 In order to capture the world market, WordPress was quick enough to provide its services in various different languages. With time the number of these languages kept increasing. Presently WordPress is available in 72 different languages. This includes regional languages as well. This multilingual feature of WordPress has made it more accepted in countries out of the US. However, 71% of users have set English as their default language in WordPress. 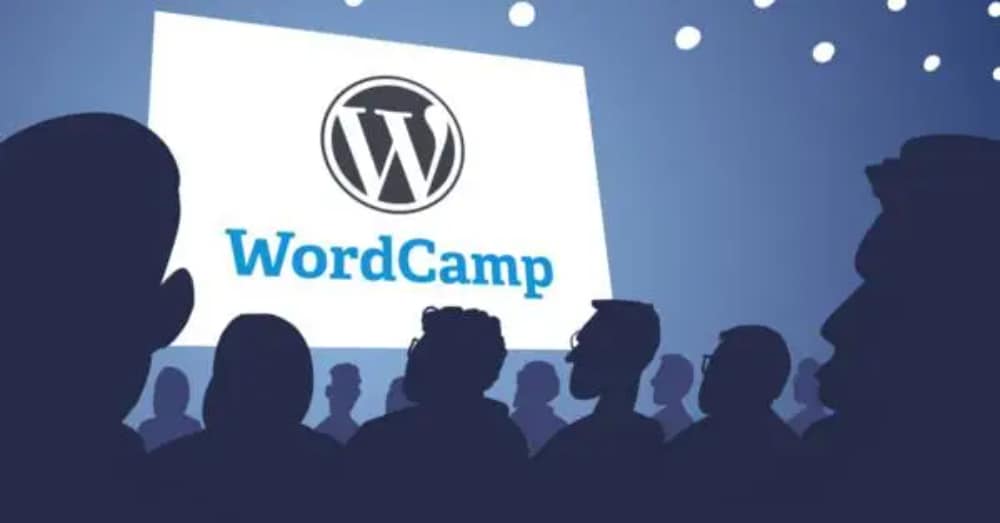 These numbers give us an idea about how widespread the use of WordPress is. What started in the US has now swept across the world. WordCamps are locally organized conferences to discuss everything related to WordPress. The first WordCamp was organized in San Francisco on 5th Aug ’06 by Matt Mullenweg. There were 500 members in this event. But today, the WordPress community has expanded to over 25,000 members across 30 groups over the globe.

I am sure even when you are using WordPress every day; you would not do not know some of the above facts. WordPress has created its own world and now has a rich ecosystem of development tools, themes, plugins, Add-ons. Given how it has transformed into an industry, we can be assured that it is going to keep growing and keep adding more users to it over time.