A good font collection is incomplete without a few good comic fonts. It expands the horizon of your creativity and helps you add versatile elements to your designs. From comical titles to creating visual effects on a video, comic fonts can really come in handy.

You might think ‘Why do I need it when I don’t create designs for kids?’ But that’s not all there is to comic fonts. Comic fonts help you to convey exuberant and exciting emotions which are often hard to convey through simple text. A visually graphic text can tell more than just a few words.

If you are looking for some good comic fonts, we are here to help you. Here are some of the best comic fonts that you should add to your arsenal to become a better designer. 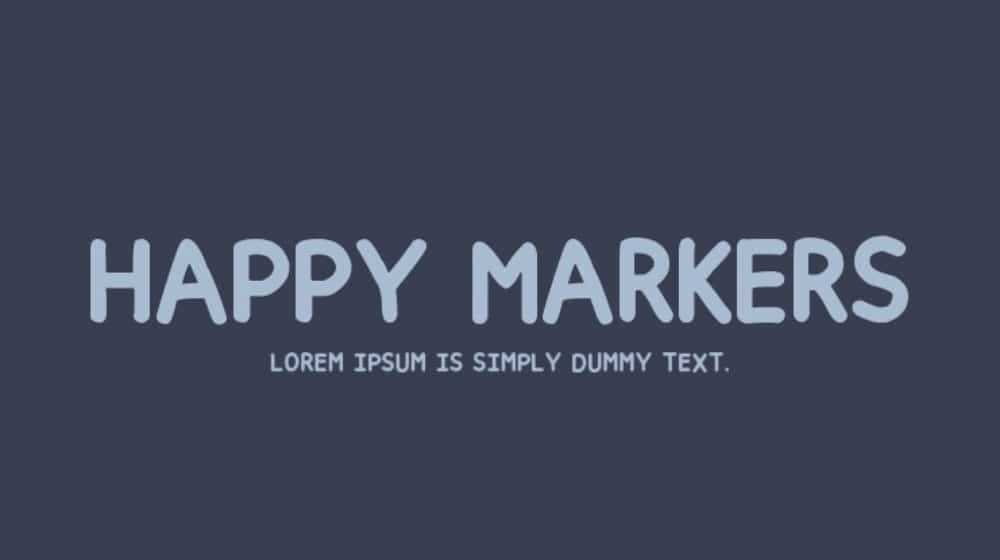 With a thick and rounded lettering pattern, Happy Markers doesn’t carry the stigma of Comic Sans and provides a light-hearted font. This amazing font created by Joseph Dawson is your perfect choice for a kid’s invitation or a  poster that exudes fun and joy. Seems as if they are drawn, the characters in this font style are all-caps and are also available in italic version. 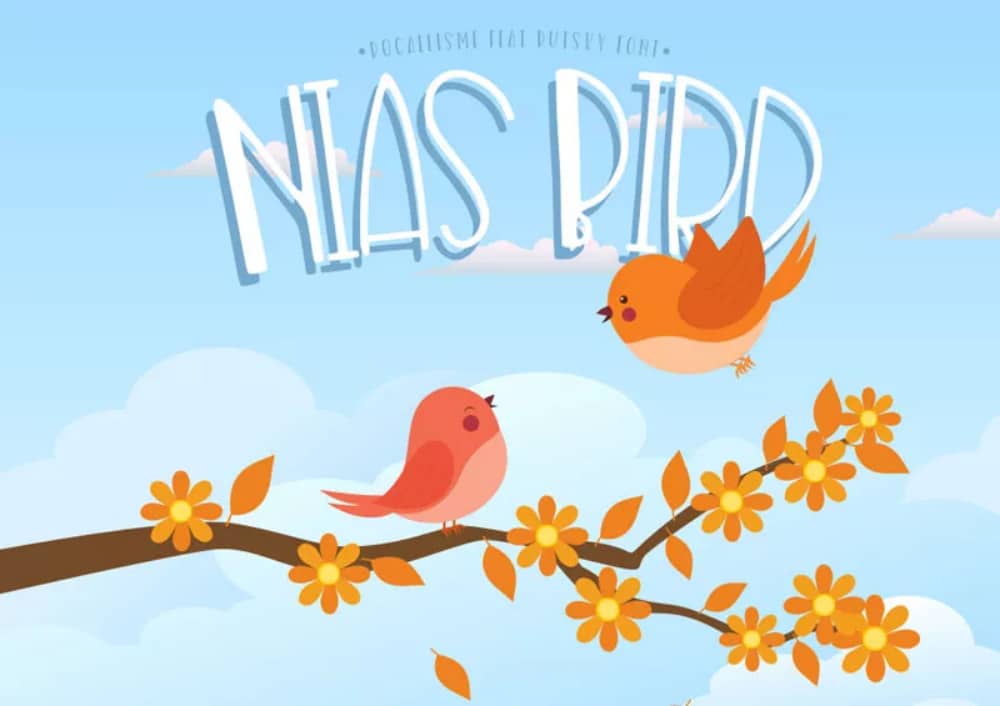 With a uniquely bulbous style, Nias Bird is a distinctive comic font that can really set your design apart. It was created by an Indonesian designer, Ryal Docallisme. Rather than a separate section of lowercase characters, this amazing font style features some slightly heavier weights that give a more Art Deco look. Nias Bird is an ideal font for making comical titles, headlines, or a range of comic covers. 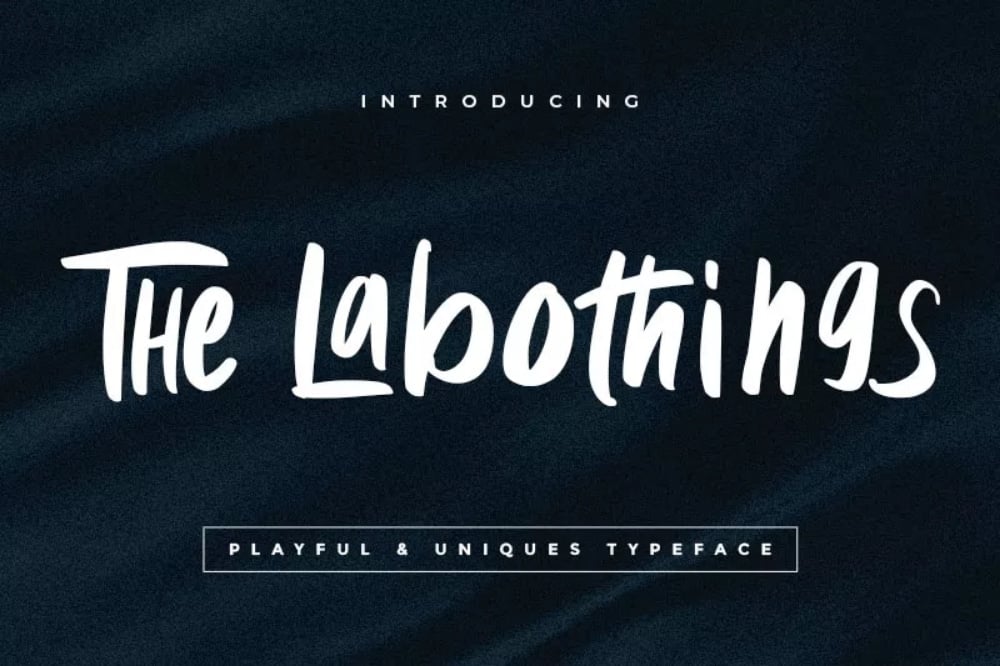 A comical, yet elegant font style, Labothings has a quirky look that seems like they are handwritten. It has a playful and visually entertaining format with lots of energy and character. Labothings creatively arrange the lowercase characters and uppercase characters which is the reason behind its quirky look. The only drawback is that it doesn’t have punctuations or other special characters, but that can be substituted by other fonts. 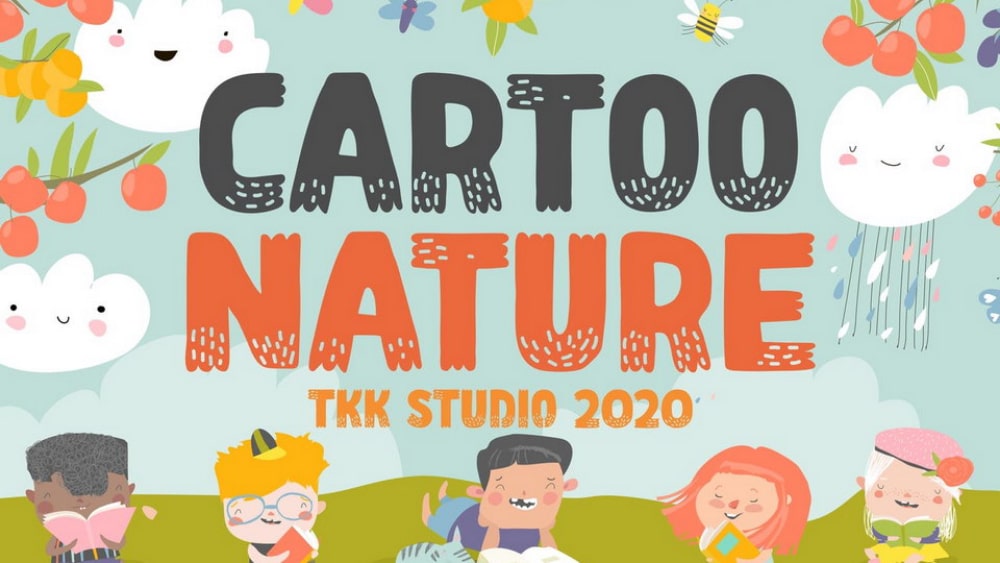 CartooNature is a cool and attractive font that will instantly catch the eye of any toddler. The heavy and bold texture of the font makes your design visible from far away and the mild color tones are quite relaxing to the eye. Add this font to any comic book, children’s book, or poster, and it will bring life to your design. CartooNature has uppercase characters, lowercase characters, numbers, and punctuations. 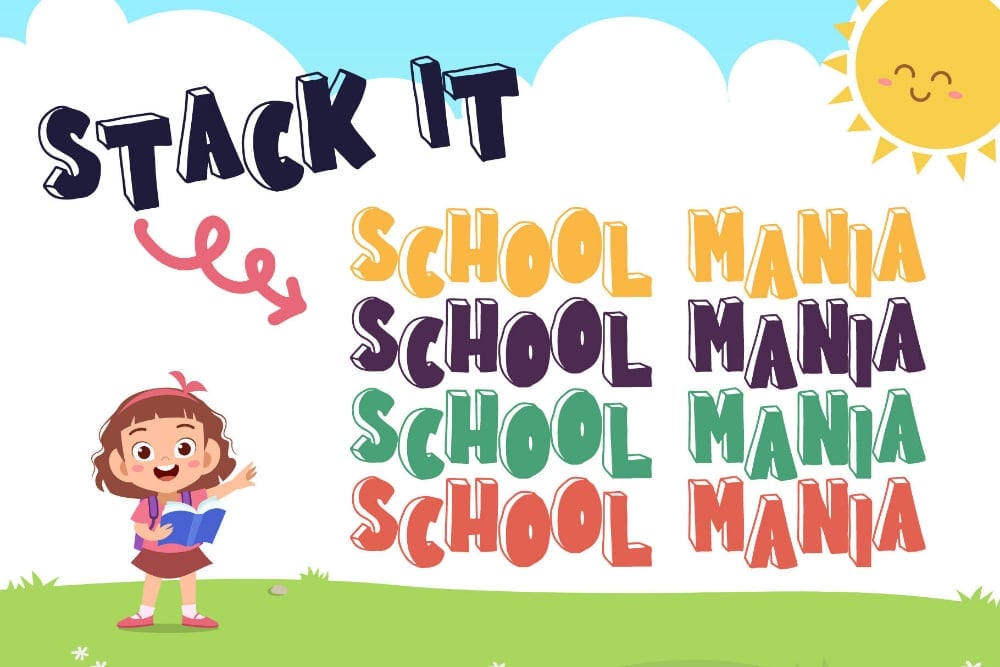 School Mania has a block-like structure that significantly embossed the letters and makes them pop out of the design. It adds a fun-loving and exuberant undertone which is very appealing to kids. School Mani provides uppercase characters, lowercase characters, numbers, and punctuations. 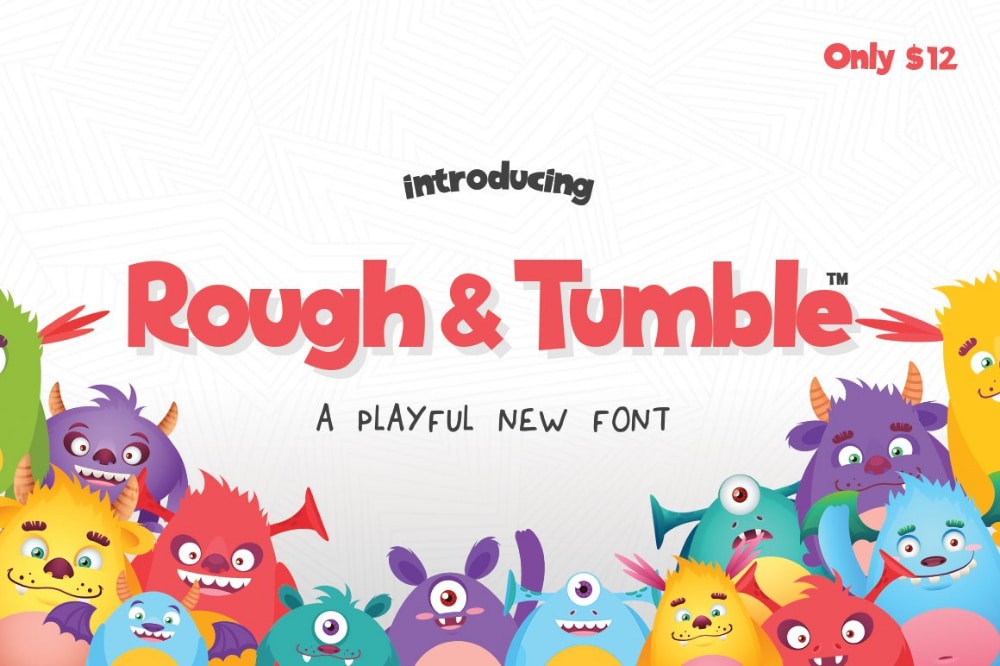 On contrary to other comic fonts that have rounded edges, Rough & Tumble has a sharp look. Nonetheless, it exudes a similar intensity of playfulness and joy. The most amazing aspect of this font is the shadow that is cast on the background which gives the design a certain amount of depth and realistic appeal. You get uppercase characters, lowercase characters, numbers, and punctuations with this font style. 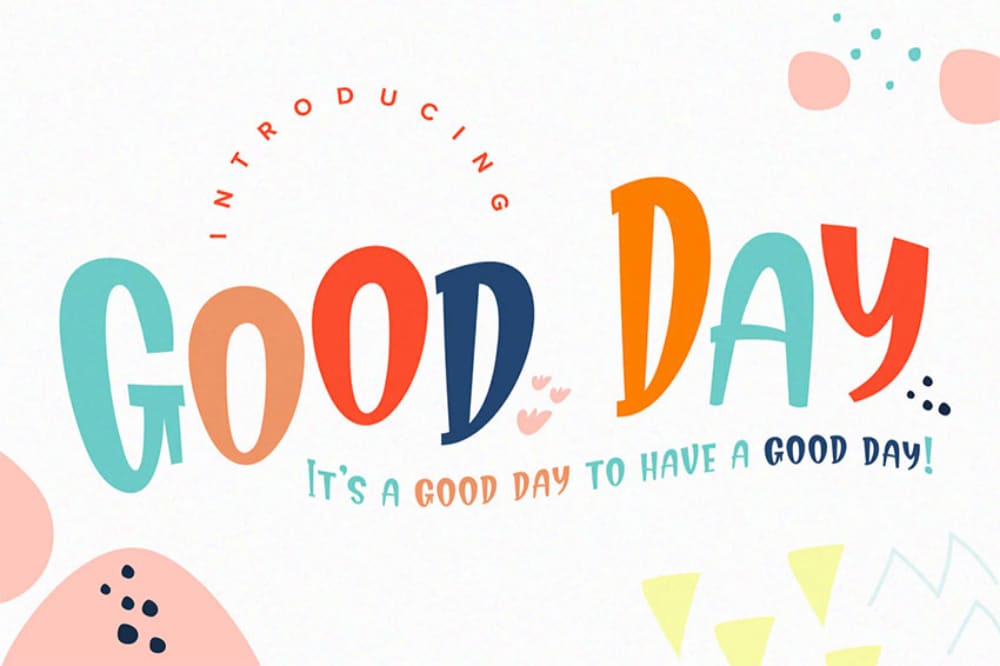 Good Day font is the perfect blend of a retro feel and playfulness. It creates the perfect font which communicates joy and a fun time. And with its eye-pleasing, yet vibrant color palette makes it even more desirable. It is an ideal font for making titles for comics, posters, books, and many more. 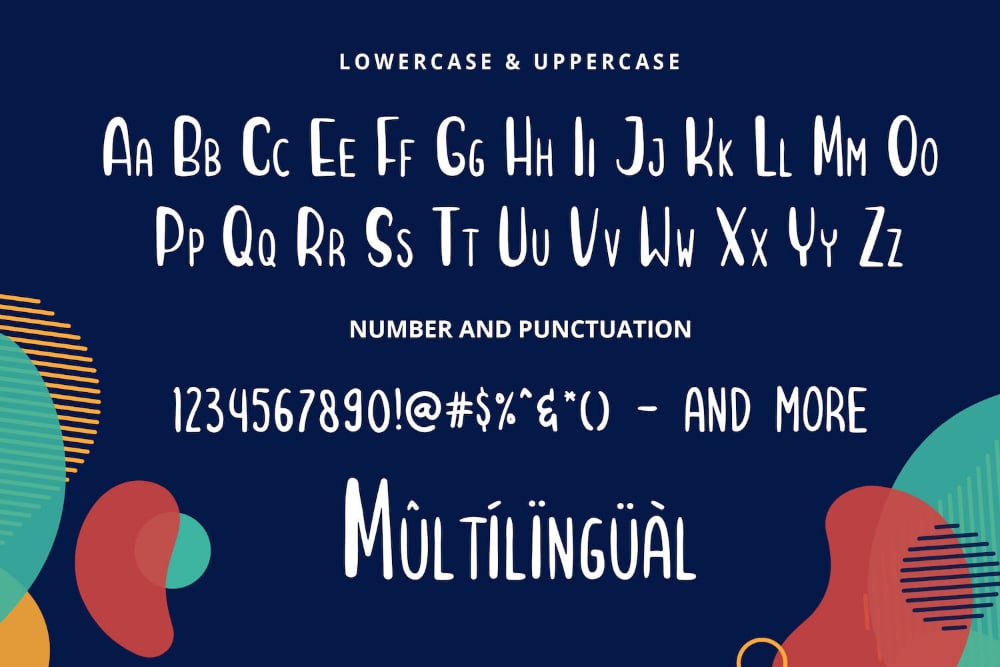 Playkidos is a cheerful font that has a sleek, yet bold look. This fun and creative font style smartly use the thickness and thinness of the font to give a playful look to the design. Playkidos includes uppercase characters, lowercase characters, numbers, and punctuation. 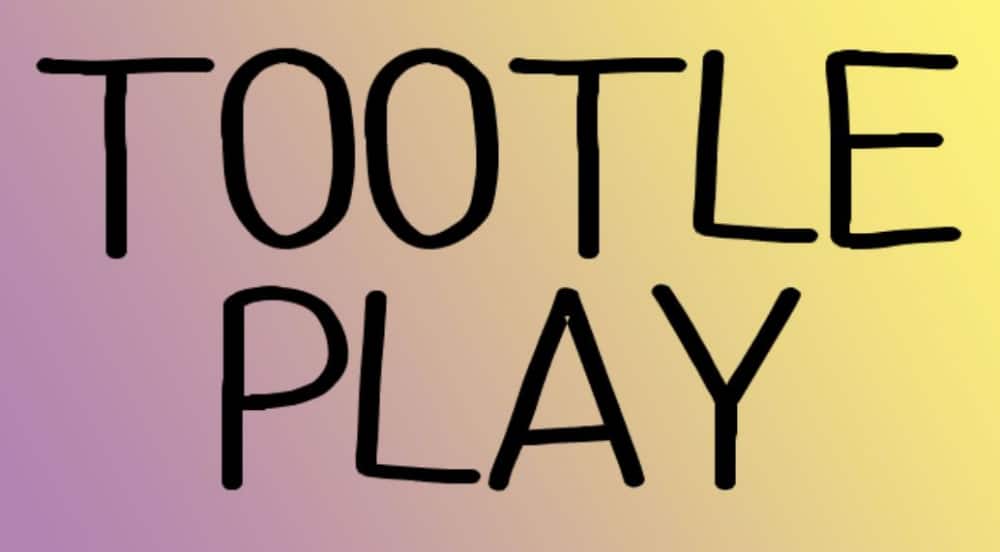 As adorable as the name is, Tootle Play will give a very adorable look to your design. A perfect choice for lettering comics or posters, you can use this font for a myriad range of purposes. It is a caps-only font that has a lively hand-drawn effect. It includes numbers and punctuations as well. 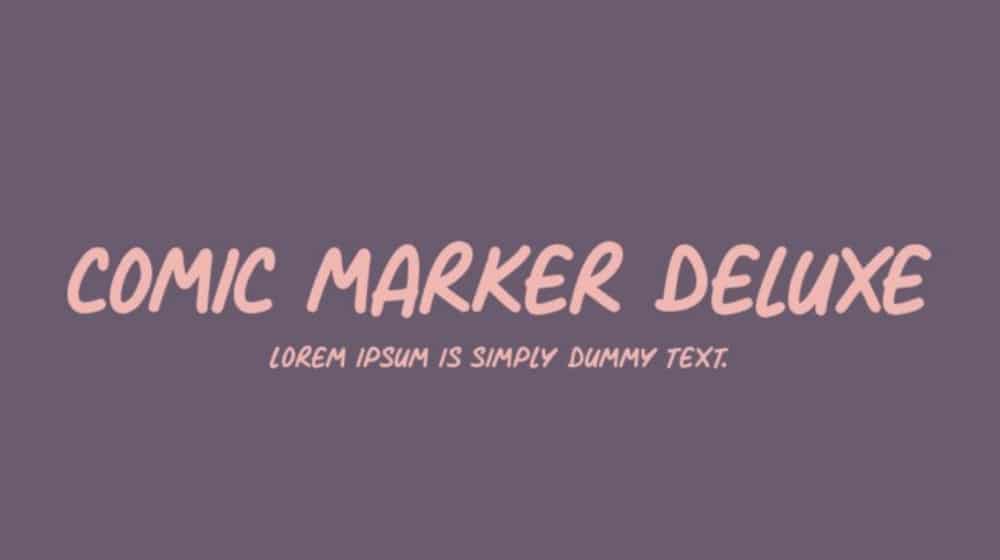 Adding on to the hand-written fonts, Comic Marker Deluxe is a sharp and rounded font that works amazingly for comic book titles or subtitles. Created by Darell Flood, this unique font mimics the effect of a round-tipped marker pen. It also works desirably for long texts as they perfectly articulate each word. Comic Marker Deluxe is available in 2 weights: standard and italic. 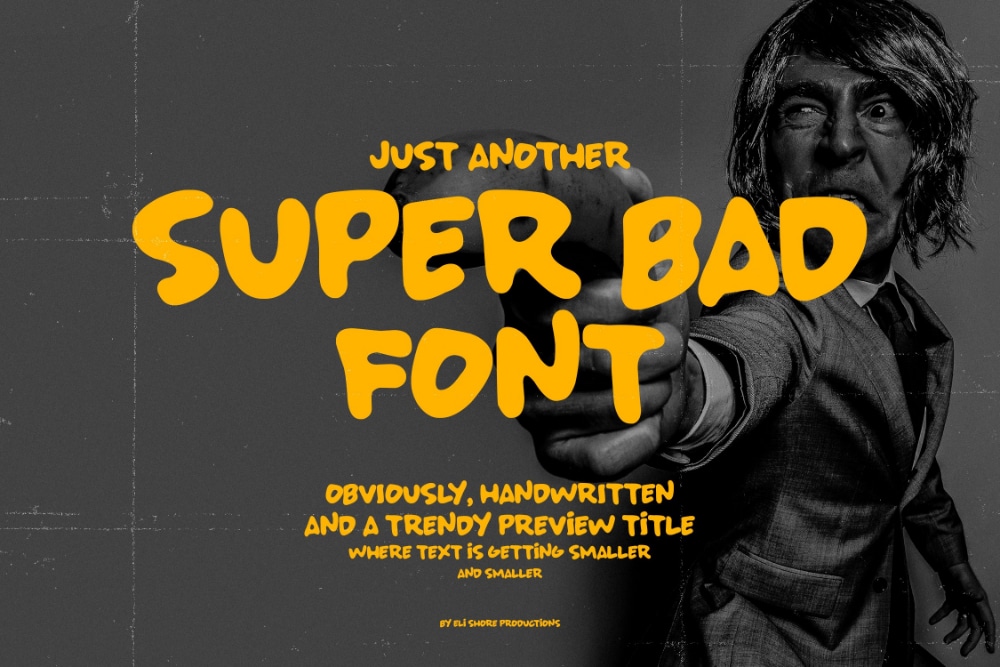 A little bit of bad is definitely good. The Super Bad font is a wonderful font that has a blobby style and a funky look. This comic-inspired weighty font gives a certain amount of gravity to your text which doesn’t overpower the design. While the font is majoritively all-caps, but it also has a set of lower-case characters that can be calibrated to give a bouncy, and unlevelled look.

As the name might suggest, Kids Magazine is an amazing font for headlines and magazine covers. Designed to attract the younger audience, this font has a big and bold texture that is packed with a lot of energy and attitude. The orangish border created on the characters gives the text a lot of depth and helps distinguish the text from the background. It is an ideal font for grabbing people’s attention.

The history of this font is really going to give you a reality check. This amazing font was hand-drawn by the famous designer, Hanoded on his kitchen table! Reality Check is a big and chunky font that has a bold and playful effect. The thin sliver of white around the text gives it a lot of depth and style. Even though being an all-caps font, Reality Check smartly incorporates lowercase characters in the text to make things look interesting. Along with that, this font also has some interesting characters and punctuations. 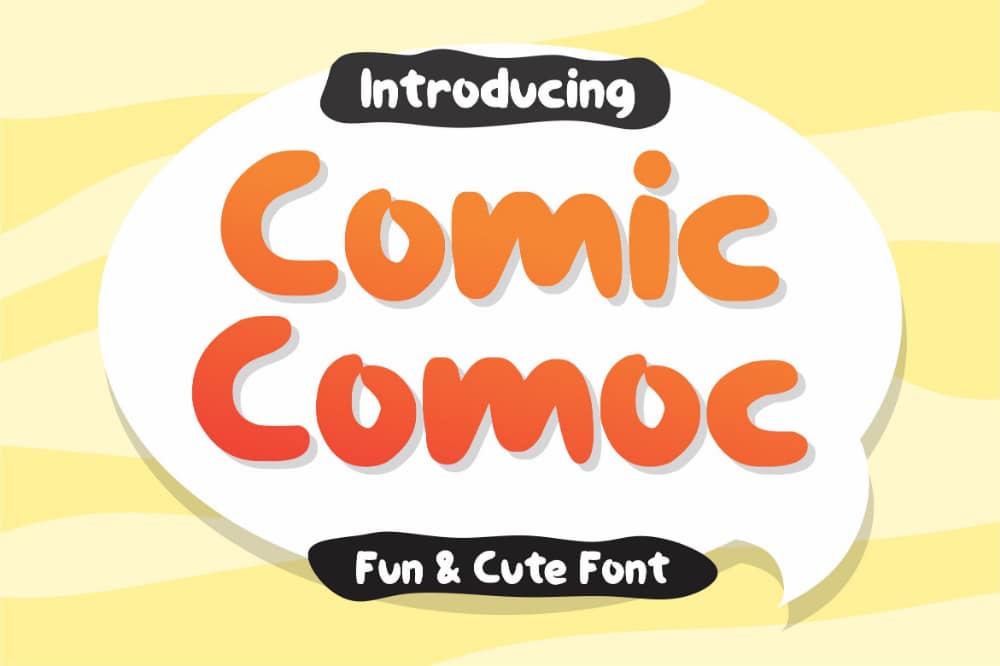 If you want an extremely comic font, then this is the one you were looking for. Designed by Dumadi Studios, Comic Comoc is a very cute and lively font that will go perfectly with your child-centric product. Ideally used for making titles and social media posts, Comic Comoc incorporates uppercase and lowercase characters to create a playful effect. It also has various symbols and accented characters in its arsenal. 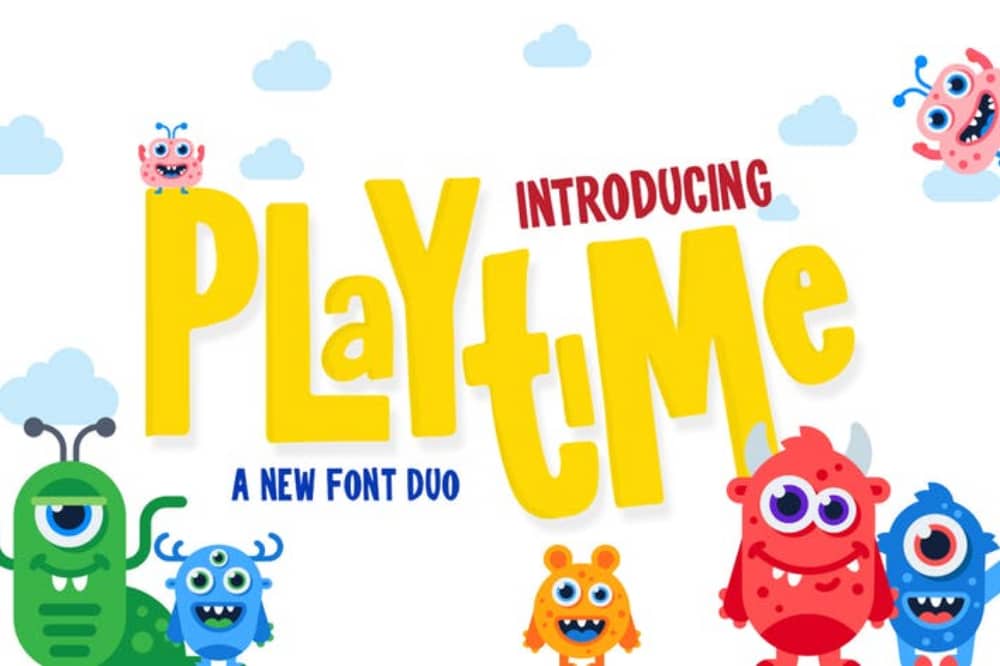 Playtime is a fun-loving and exuberant font that can be used to making headlines, titles, posters, movie covers, and lots of other purposes. This amazing font comes with a fun vector pack which has some quirky and adorable characters to spice up the design. If you want to attract a younger audience, this will prove to be the most ideal font for it. 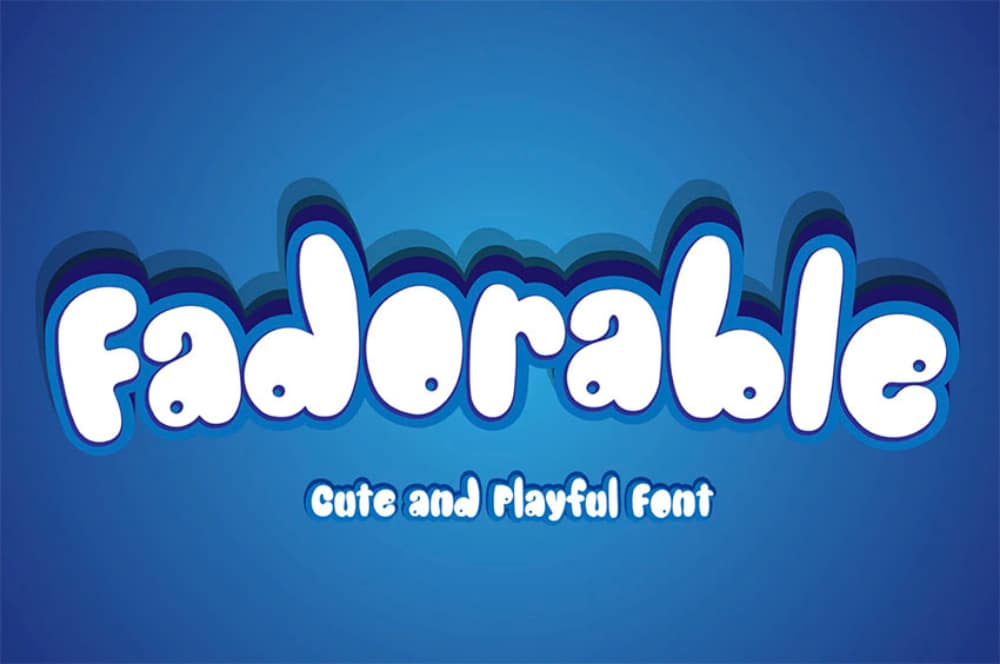 Fun + Adorable = Fadorable! This cute and playful font has a kid-friendly appeal that attracts your attention instantly. This font incorporates a pillowness, resembling speech bubbles. The characters are well distributed and designed so that they could be read easily and effectively. The font includes uppercase characters, lower case characters, and tons of glyphs 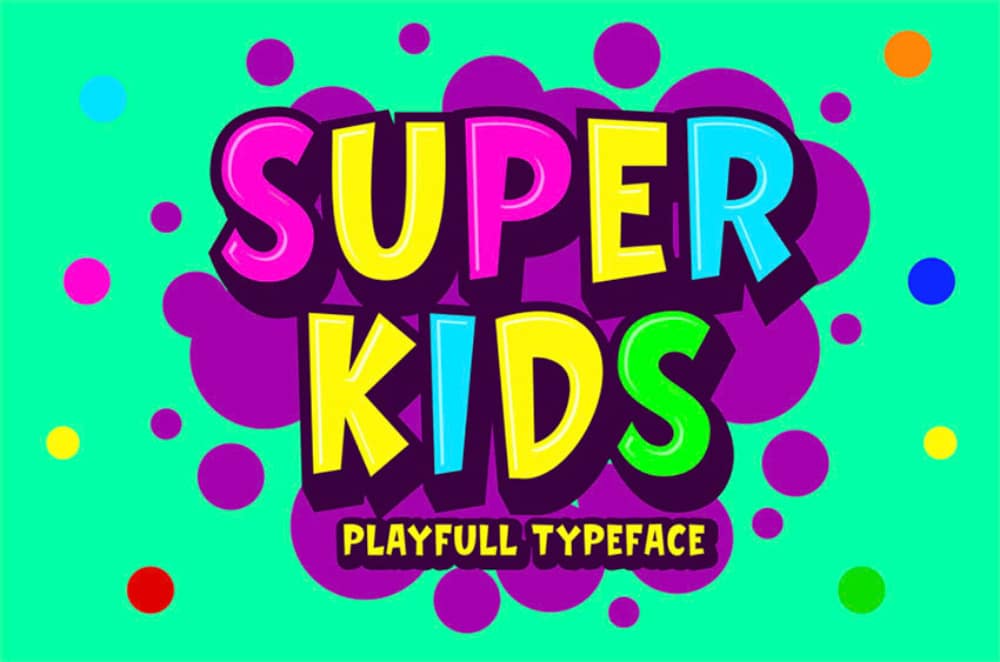 This bright and flashy font style can easily pull in the attention of your audience and leave an impactful image in their heads. With the use of a vibrant color palette, this font gives off a playful vibe. The bold and bordered effect also adds to the personality of the font style. It offers both, lowercase and uppercase characters, along with numbers and punctuations. You can use it to create eye-catching titles, to print awesome texts on T-shirts, headlines, logos, and posters. 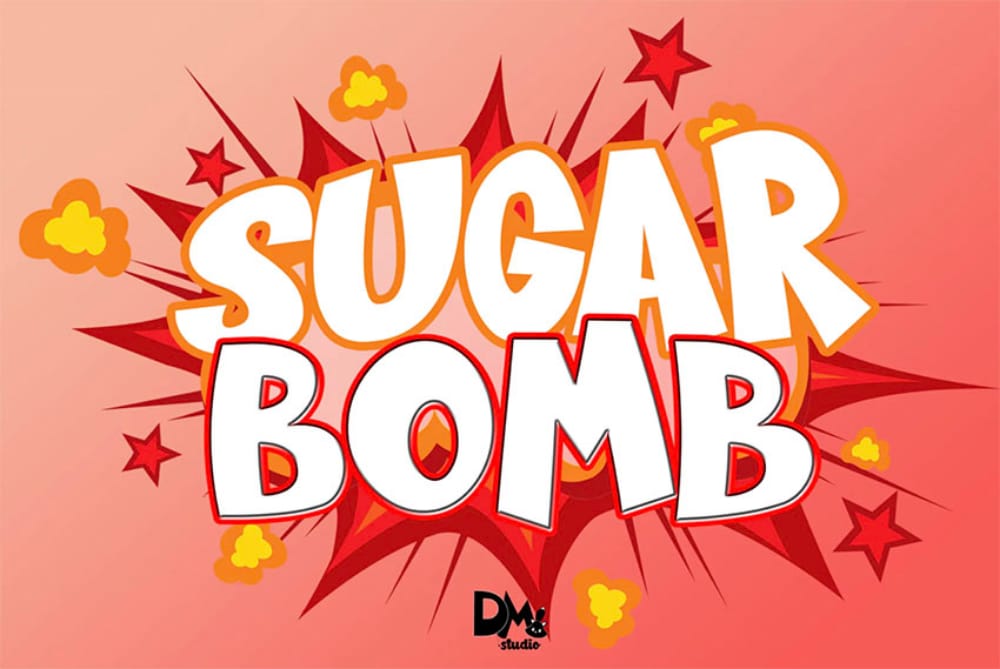 Sugar Bomb has an explosive effect on its viewers. Resembling a pop-art comic book, this bold and exuberant font will help you incorporate a dramatic angle to your story. You can use this font for a wide range of other applications, like posters, movie titles, and much more. The added effects of the explosion in the background are an added advantage. 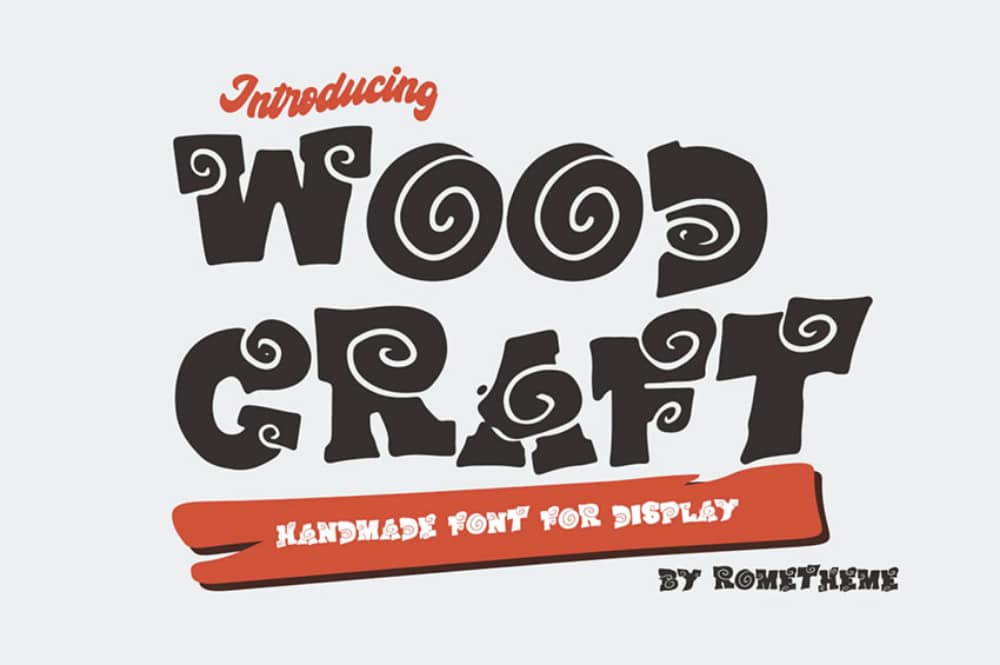 If you are not a designer, then I am pretty sure you wouldn’t have seen this font before. Wood Craft is an incredibly cool, hand-made font that incorporates curls and whirls on its bold text to give it a little character. It is the perfect font for any project and product that is kid-targeted. You can use it to create book covers, movie titles, cartoon titles, posters, T-shirts, and many other designs. 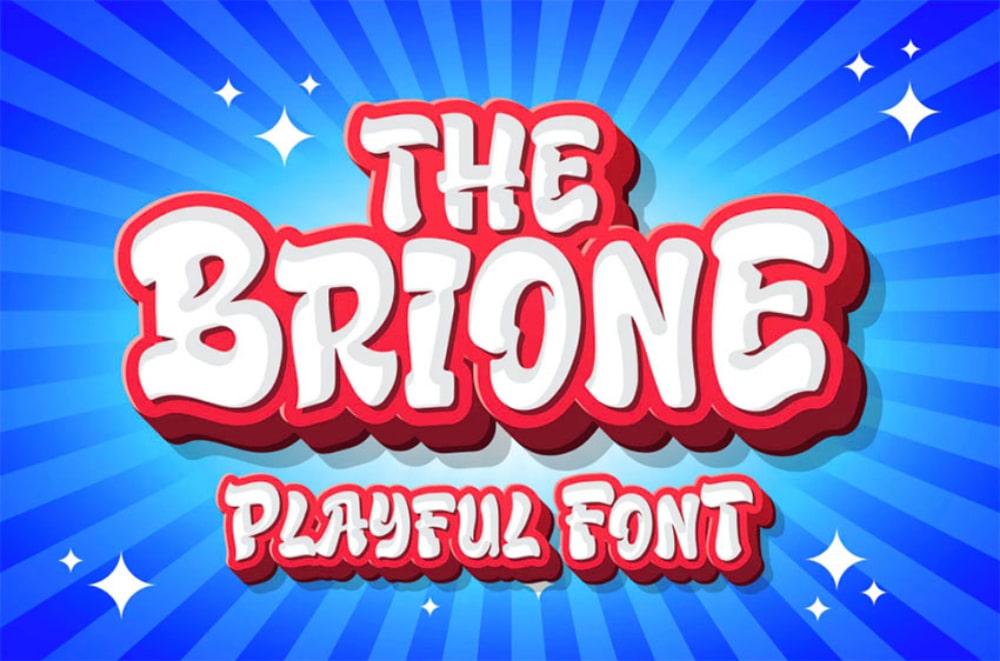 Brione is a unique three-dimensional font that has curvy edges and a bold structure. The amazing placement of shadows and the thick pink border around the font create a comic-like effect that attracts its audience instantly. It offers uppercase characters, lowercase characters, numbers, and punctuations. The Brione is a top-class comic text so use it for making headlines, titles, and any other purpose where you need a big reveal. 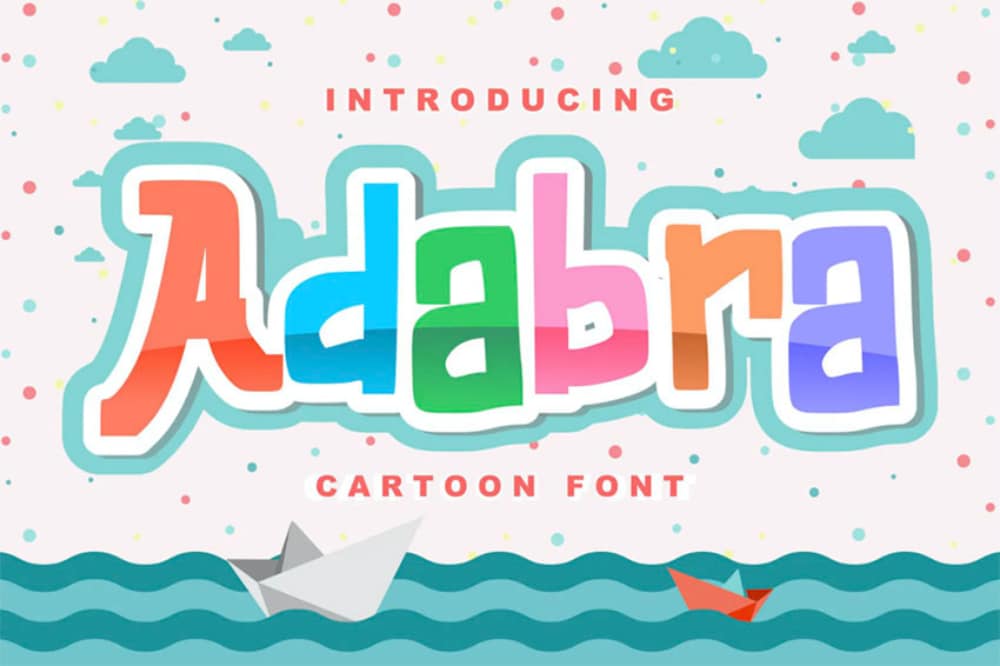 Looking for an ideal comic font that can be applied anywhere? Well, Adabra is the best choice for that. With its sharp and bold construction with a versatile color palette, you can create an attention-grabbing and vibrant design in no time. This decorative font comes with uppercase characters, lowercase characters, numbers, punctuation, and plenty of ligatures which will help you create a unique look. 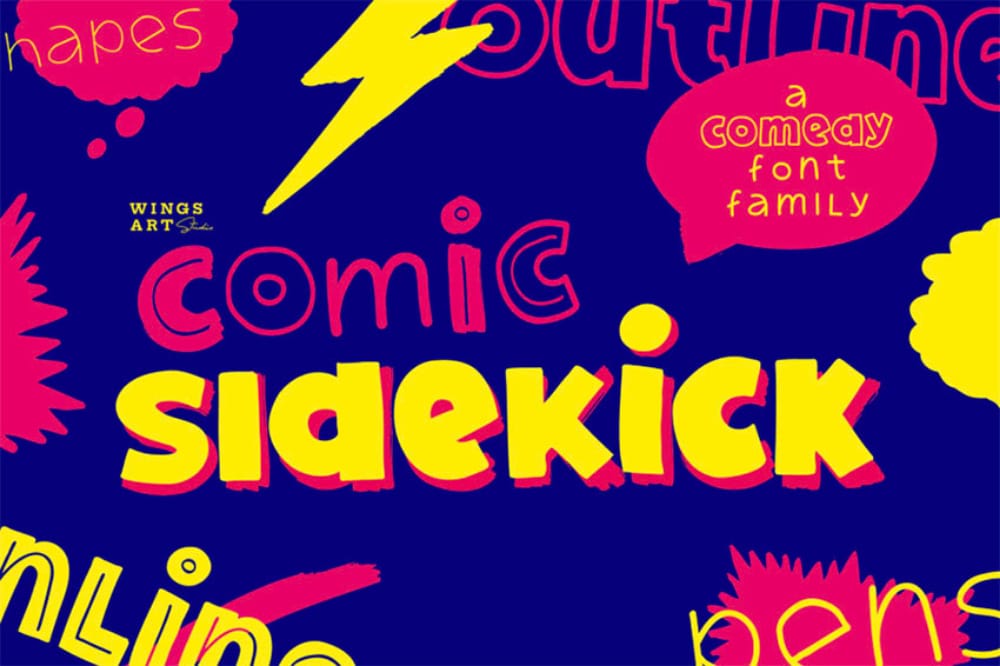 You will not find a funkier typeface than this one. With brightly contrasting colors and multiple effects, Sidekick Comic is an exuberant font that instantly attracts your audience’s attention and communicates a creative feeling. It contains 11 different font styles that can be mixed and matched as per your requirement to create the perfect comic title. It also uses a lot of comic shapes like speech bubbles, banners, explosion patches, banners, underlines, and lots of other elements that you will have fun experimenting with. 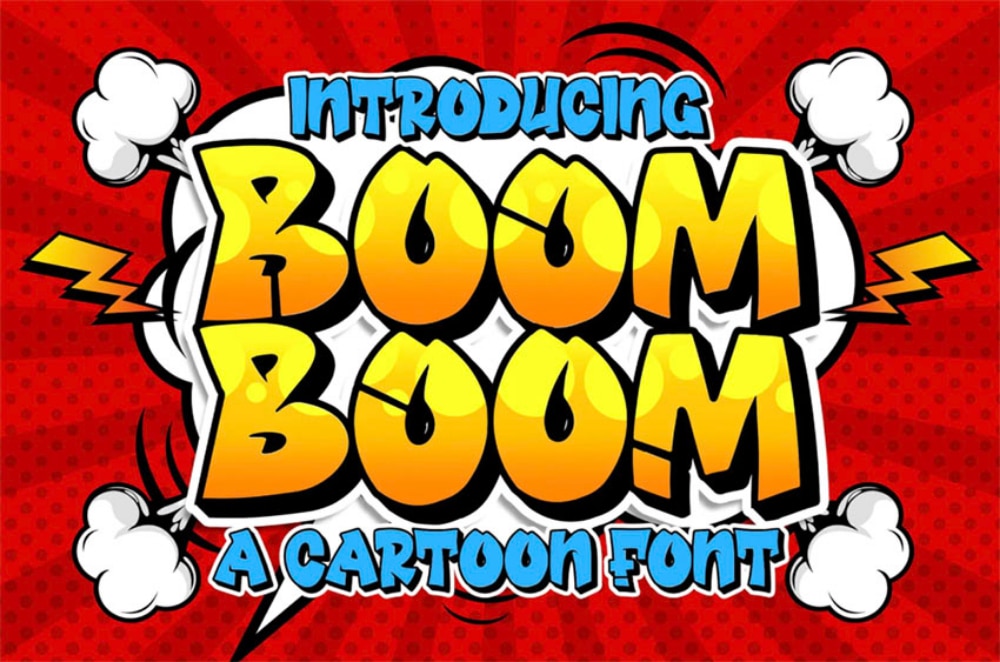 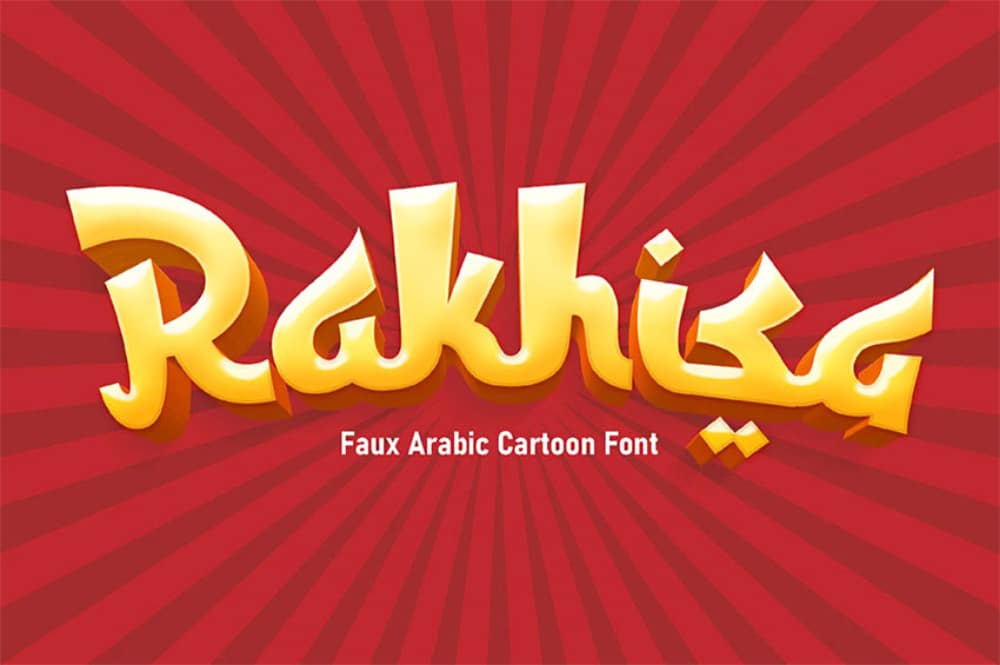 Have you ever seen an Arabic-style comic font? Well, now you have. Rakhisa is a perfect amalgamation of Arabic text and comical effect which gives off that Aladdin vibe. You can use this font to create a strong and conceptual title, headline, comic book cover, or a myriad of other purposes. The font includes uppercase characters, lowercase characters, numbers, and punctuations. 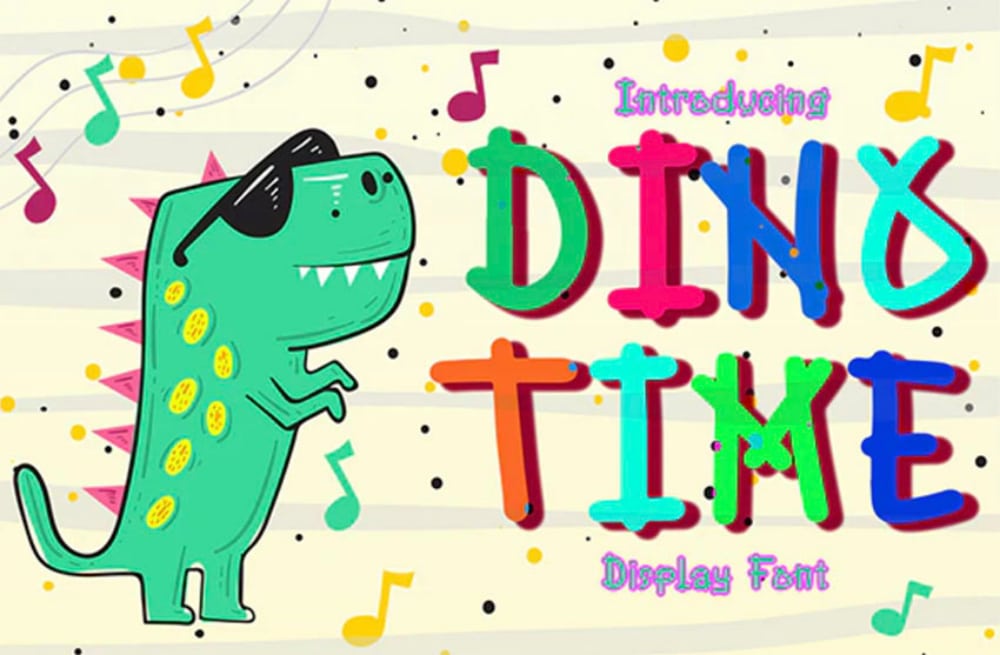 Look at this cute and adorable font. Without a doubt, Dino Time Vintage is one of the most adorable typefaces that you will ever find. With its vibrant color palette and comic feel, you can use this font for making titles, book covers, infographics, and lots of other applications. It doesn’t only exude joy and happiness, it also has a certain quality that instantly attracts its viewer and creates a connection with them.

Impressed by them? You sure will be. These incredible fonts can help you add such flair and gravitas to your designs that your viewers will be awe-struck.

From explosive effects to subtle tones of joy and happiness, these comic fonts can help you express a wide range of emotions and expressions that are hard to achieve through mere words. And while doing so, they also make your design more attractive and pleasing to the eyes of your audience.