It is safe to say that the low poly illustrations trend began by a fluke. Originally used to design 3D models and sceneries for video games, low polygons, due to their fast rendering speed, turned out to be high preferences. These kinds of illustrations are created using any 3D software; however, the most commonly used one remains Cinema 4D.

Polygon styled designs have always looked unique and creative when it comes to web pages and blogs. They add that extra graphical element to the layout that makes it look edgier as well as classy. Designers have successfully created complex polygonal designs that portray a wide plethora of landscapes, models, humanoids, objects, animals, and what not!

Here are a few beautiful low poly illustrations which have struck us the most. You can view these illustrations and draw inspiration to create your own. 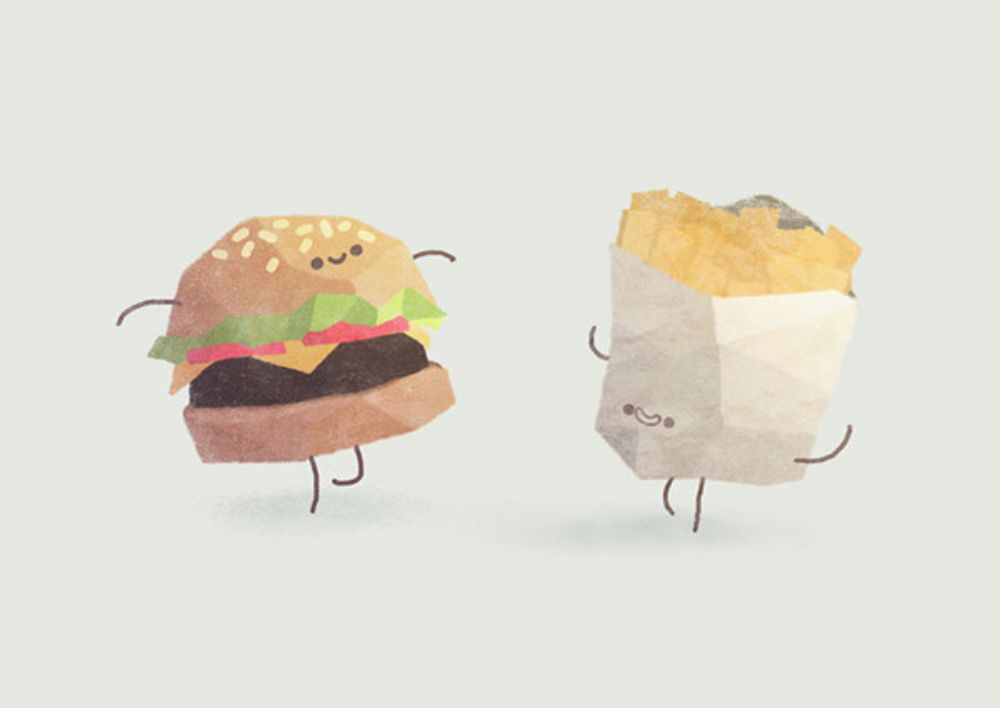 This series of low poly illustrations consist of all the duos, which are a pair. Examples include fries and burgers, ax and wood, guitar and a pick, lemons, and squeezer and lots more. This series is well-thought-of and executed with high precision. While it is not only graphical but with an induced thought, it also makes the viewer relate to the concept and want to see more. It is an excellent example of low poly illustration graphics given its relatable nature, secure connection to the idea, and clean design style.

2. A Simple Night by Calder Moore: 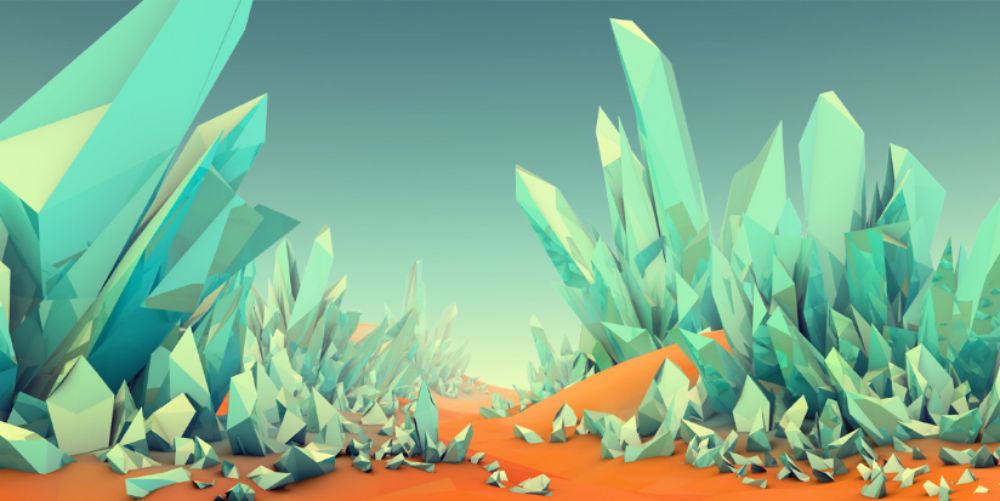 This is a stunning landscape styled low poly illustration. It is precisely designed keeping in mind the shades and tones of colors, the depth of the frame as well as the forms that it needed to be disintegrated too. Created by Calder Moore, a low poly illustrator, you can also download and print this artwork for an extra cost. You can choose to amp up the ambiance of your room with this design on the wall, or even use it as a frame in your office to give you a relaxed feel. It is also available in 5 different sizes that you can explore. 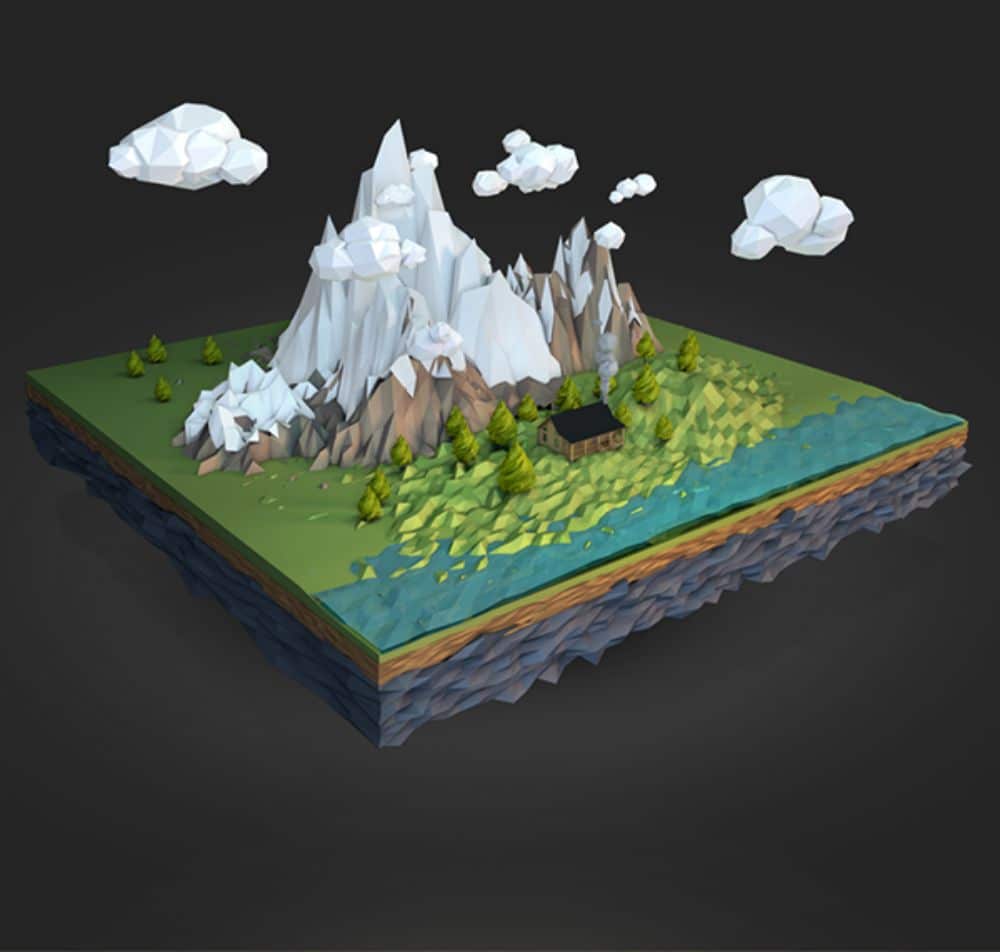 Mammoth Falls is a multi-landscape low poly illustration series by creator Aldo Pulella. The artist tries to capture the various scenarios of the ice age world, with tiny details like a small hurt, a ship, or a gondola to give it the human touch. However, the illustrations are far more complex than any other, and the true artistry lies in visualizing the scenarios and landscapes in a polygonal formation. It is an excellent piece of art, and each frame or illustration has a new story to tell. 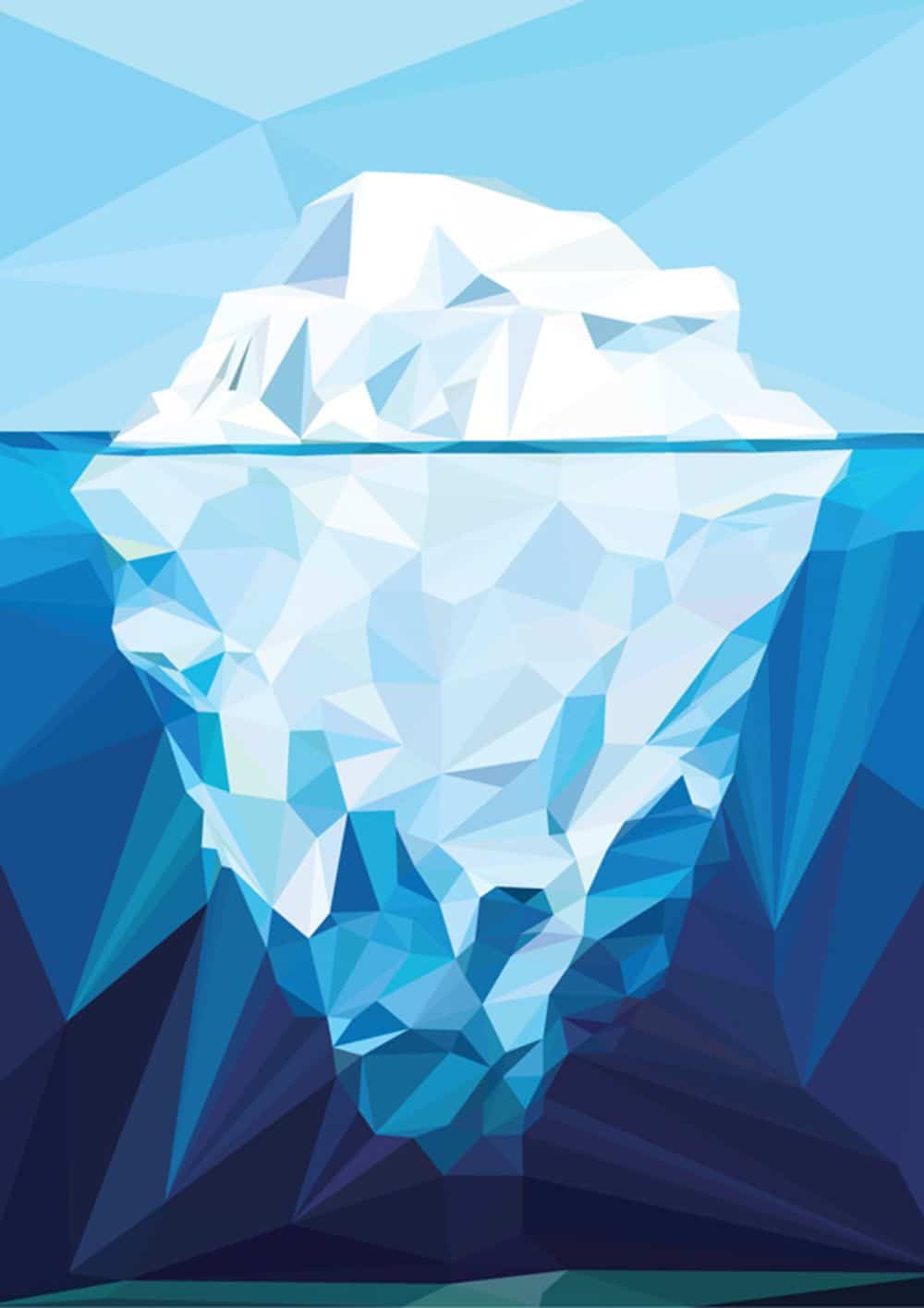 Even though this low poly illustration might look minimal, it requires a considerable amount of detail to create the kind of wireframe work that this embodies. You can notice the various shades of colors and the grading that goes into the coloring process, along with the visualization skills that bind the illustration. You can view snippets of the process work on the provided link and understand the process of creating a low poly illustration as well.

This is one of the most glorious and beautifully done series of low poly illustrations there has ever been! It is all about capturing and smartly portraying an elaborate study of birds, their forms and actions, and then illustrating them in the way of polygons. Every color, stroke, and form has to do justice to the bird, and the details are commendable. Later on, you can also view various portraits of famous personalities such as Nelson Mandela and even Santa Claus, which has been mastered by Breno Bitencourt within his first hand at low poly illustrations. 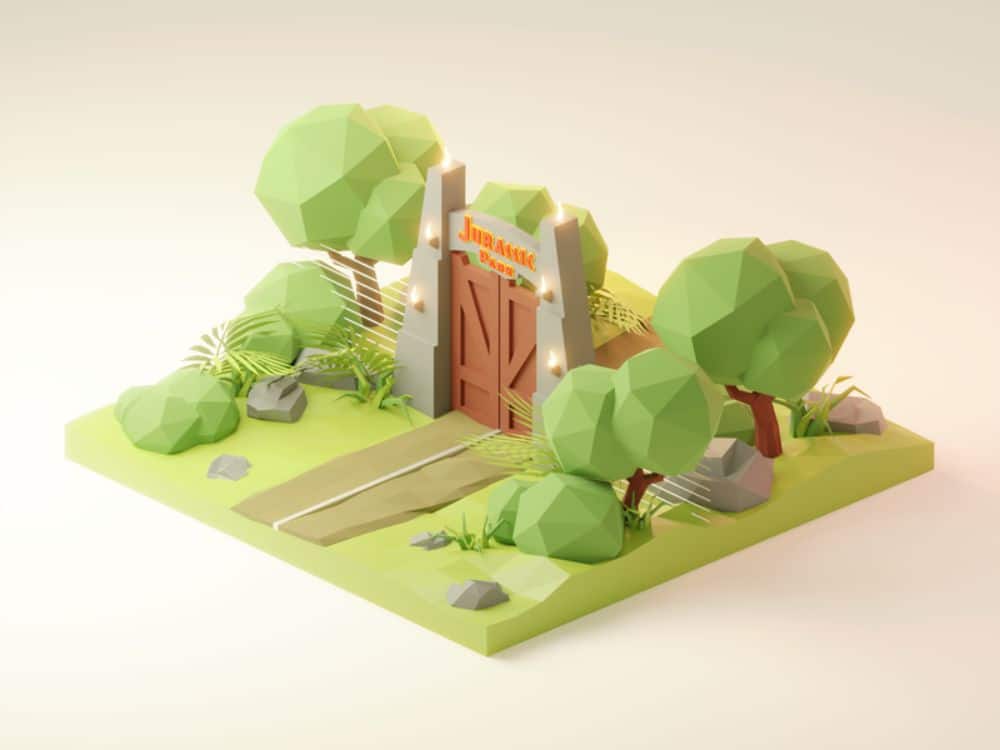 Roman Klco created this artwork in 2019. Inspired by the iconic set up of the movie Jurassic Park from 1995, Klco was determined to create a low poly version that could elevate the scene to a futuristic level. It is a clean graphic design that captures all the necessary elements from the original Jurassic Park gates and forest with tiniest details like the fire batons at the entrance and the barbed wire fencing. For all those looking for a dramatic low poly illustration, you can always draw inspiration from movies and music videos to suit your artwork or website.

7. Alsatian and Wolf by Rob Bailey: 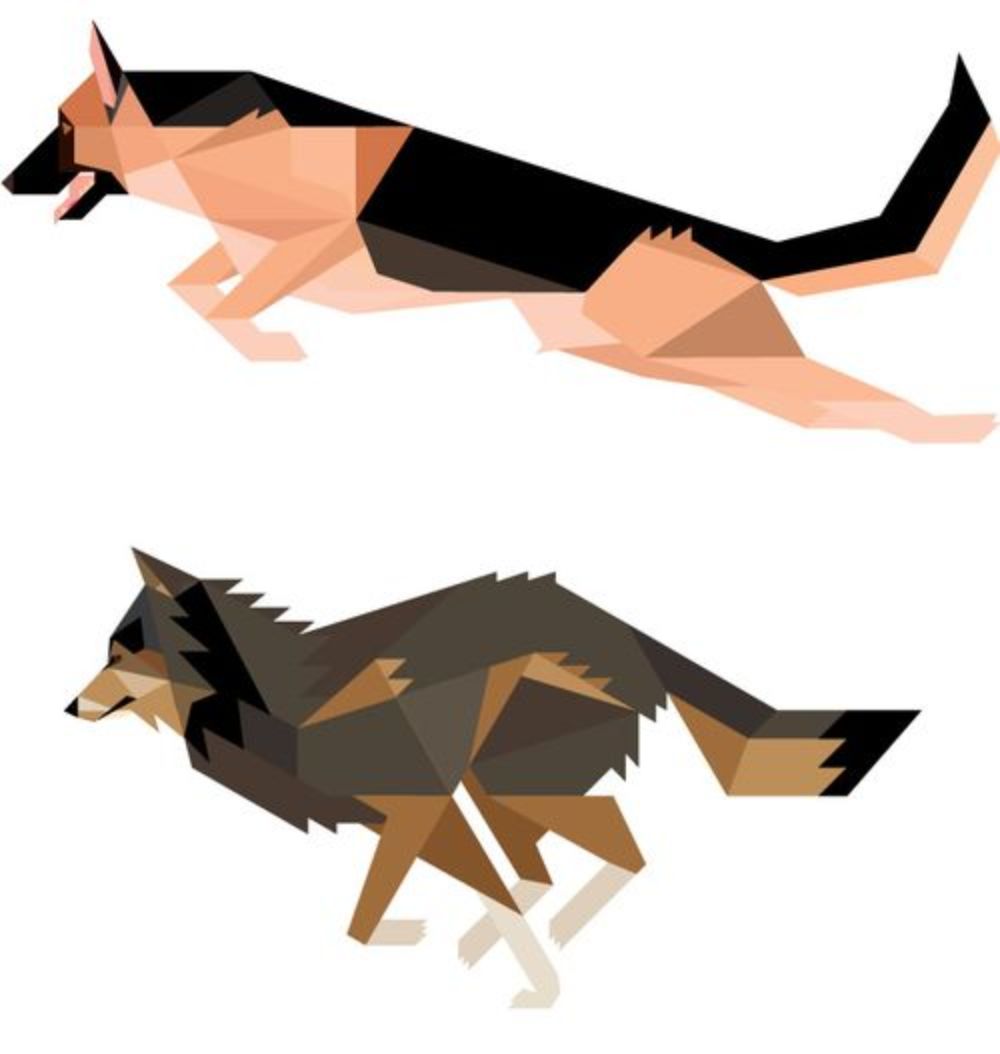 This piece of art by Rob Bailey is a study of the two types of animals – an Alsatian (German Shepherd) and a wolf. The minute detailing between the two figures is what distinguishes their features and models. The choice of colors, as well as the division of the forms into multiple polygonal designs, is attractive in the first viewing as well. One can distinguish between the two breeds purely based on the color, and the hair growth of the animals is articulated very precisely. 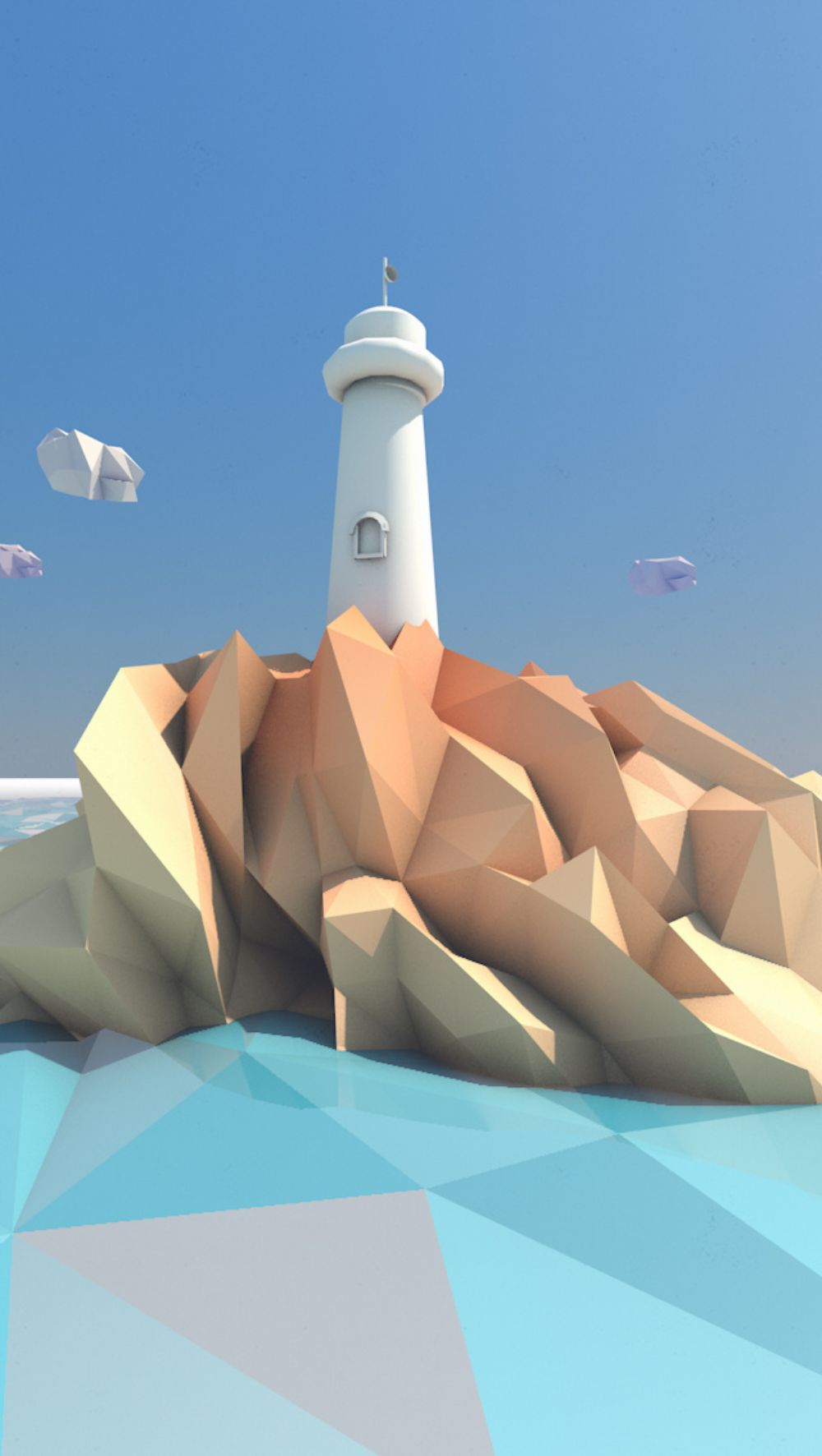 This magnificent low poly illustration by Andrus Valulis is one of the best representations of a lighthouse. He picks a fresh, pastel color scheme for the illustration that perfectly fits the feel of the artwork. Looking closer into the detailing, we can see the reflection of the rocks in the translucent sea waves beneath, which gives it a slightly iridescent, yet water-like feel. The circular nature of the lighthouse, on top of the rocks, creates drama. That highlights the proper choice of colors and the play of light and shadow. 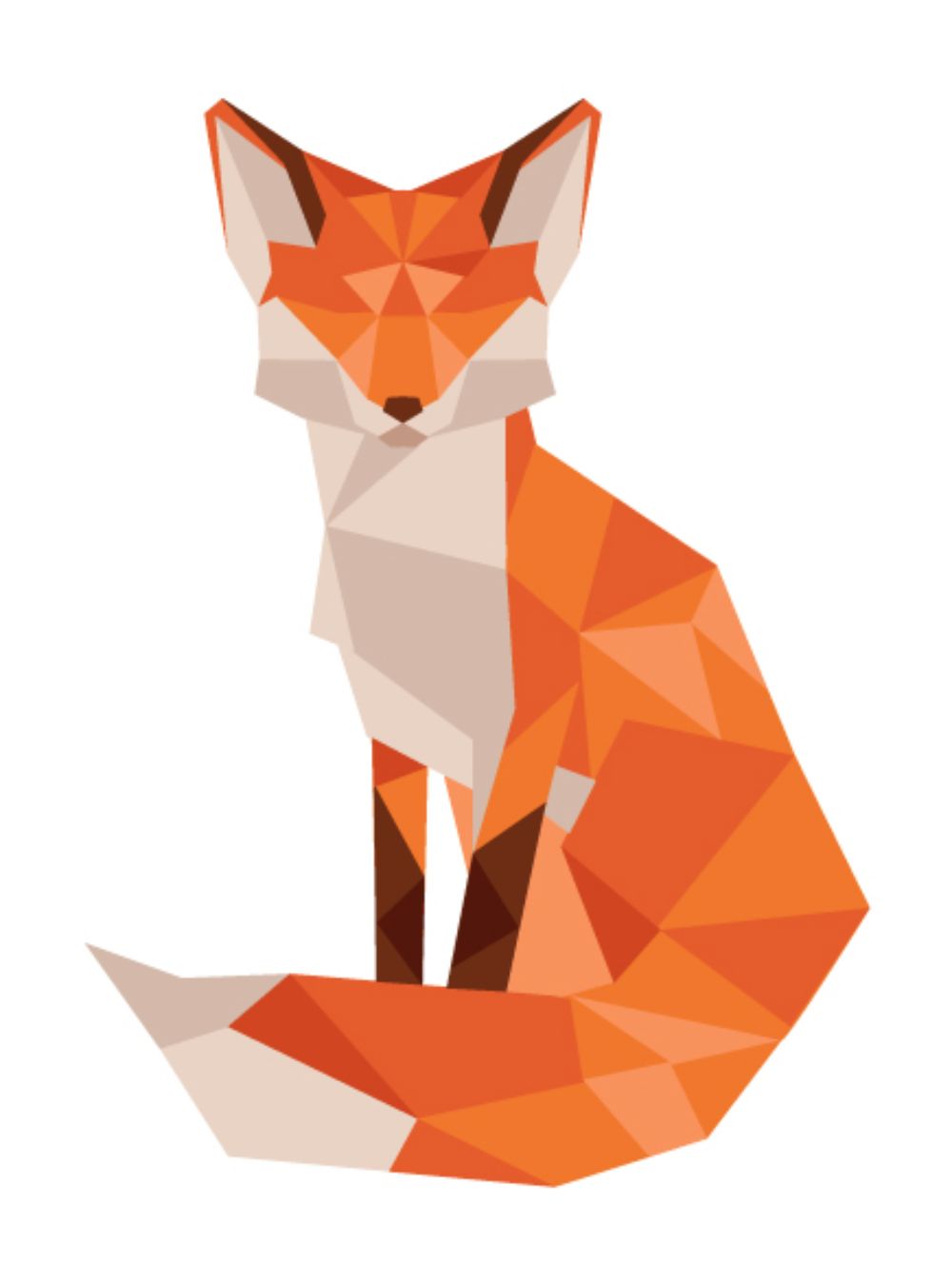 This low poly illustration turned into a logo for Northridge Inn, a hotel in Ontario, Canada, so its use must be with their permission. A super casual, yet precisely done animal low poly illustration, the fox has every detail that it must have. Right from its upright ears, a foxy nose, and the sitting positions, it is both a statement as well as a mascot. The colors chosen are entirely in sync with the animal’s real-life version, and the scale and proportion of the illustrations truly portray the right kind of size. 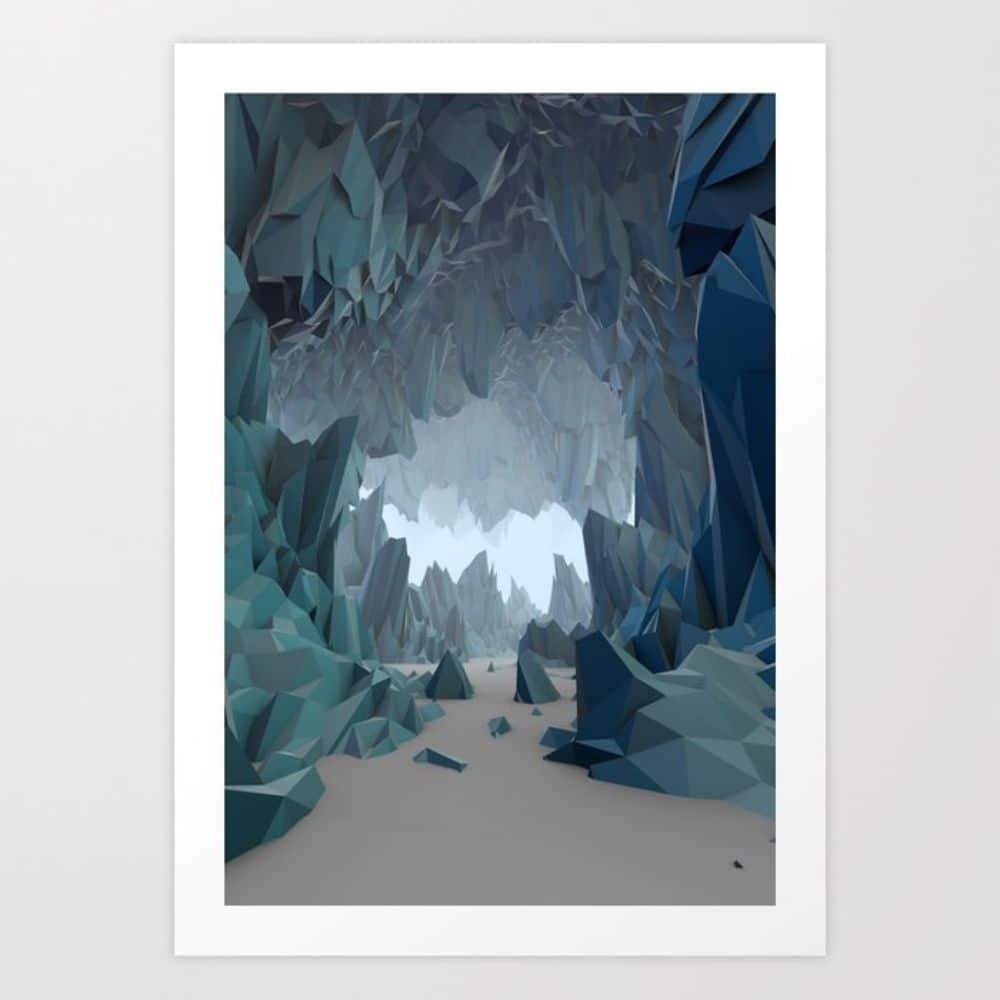 Borrowing inspiration from the ice caves, this intricate masterpiece is another gorgeous low poly illustration by Calder Moore. As we have seen earlier, his artworks are mostly nature and landscape centric and try to justify the real colors and grading. Much like actual ice caverns, sharp and pointy shapes that genuinely embrace the cold nature of the place with the shades and tones color it. The sense of depth conveys through the use of lighter, more grey tones as we go deeper into the cavern. Perspective is another highlight of the artwork that rightly does justice to space and depth of the field of vision. 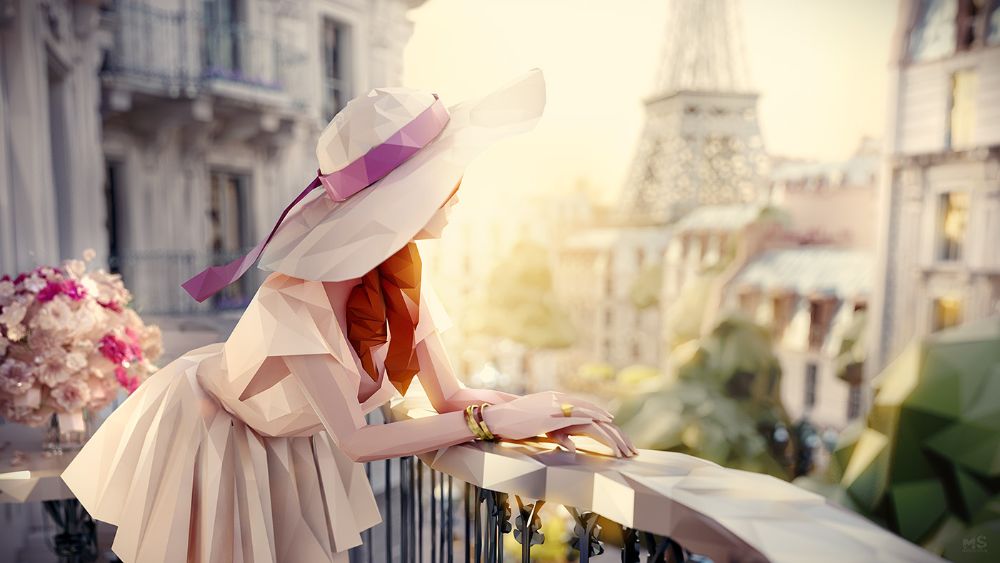 This is one of the most sensational series of low poly illustrations by Mat Szulik. It took about two whole years to finish this project, and the inspiration began with his obsession with the city of Paris and the idea of it in triangles. The series focuses on various attractions around Paris, from the Louvre to women along the picturesque streets of Paris. Mat has concentrated on every detail, every shade, every grading tone of hues, and every design principle that has ever existed. Very tastefully done, this series is a superb effort to portray the French city in a polygonal romantic style – almost making it a one of a kind experience. 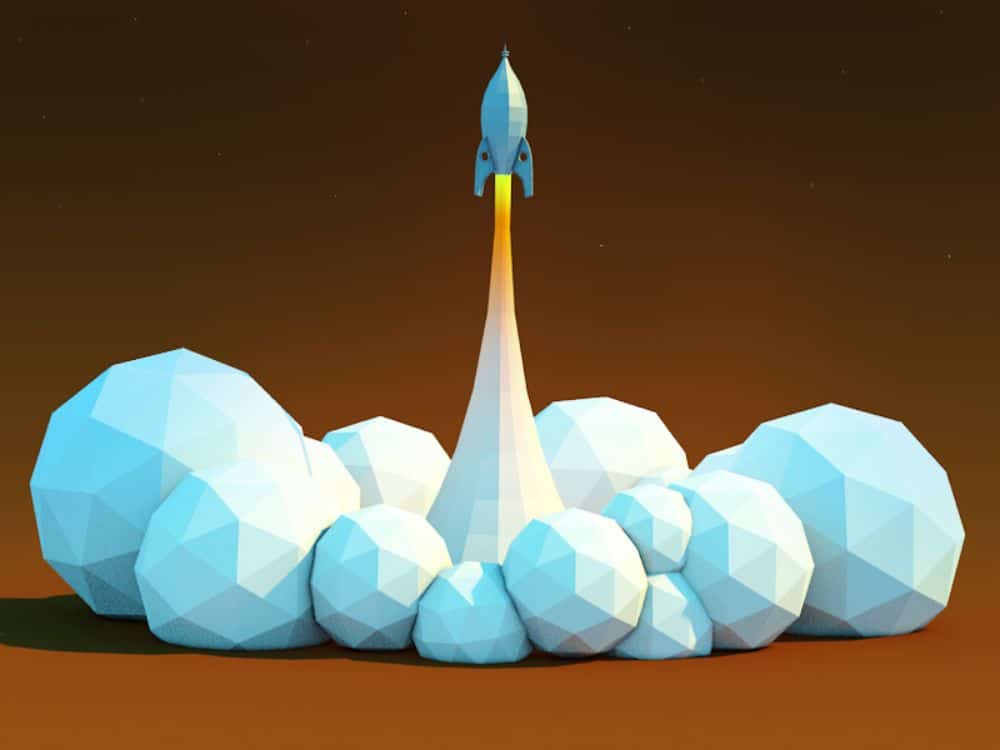 This low poly illustration by Joe Ski is a beautiful amalgam of futuristic design with a quirky effect. The composition of example is slightly comical, in a sense, the tiny little rocket with a large cloud of gas makes it more interactive and attractive. As mentioned by the creator, it is a rather fun design, and you can easily recreate similar configurations if you feel inspired! 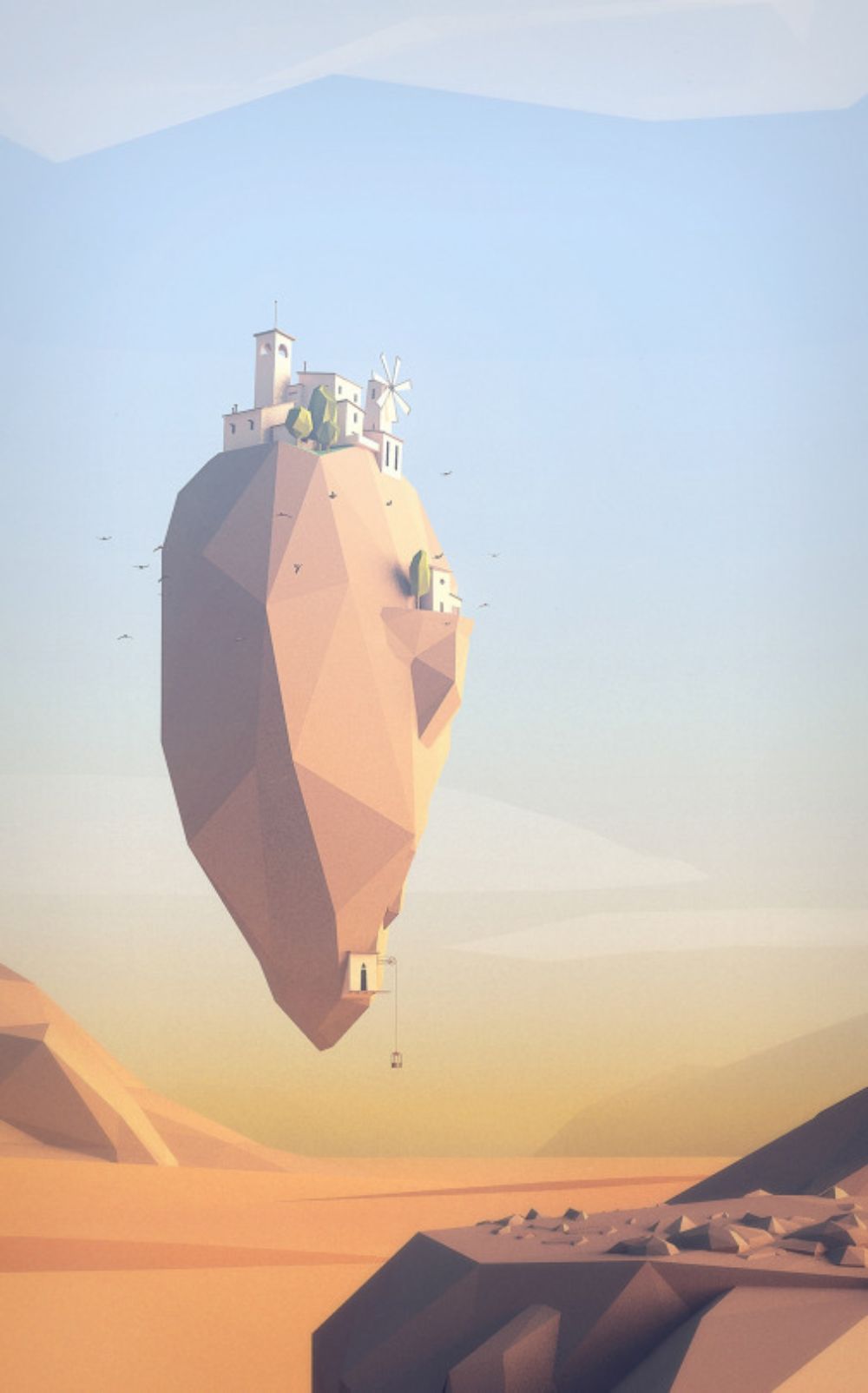 This blog lists down all the beautiful low poly illustrations by the artist Riccardo Zema. However, this illustration is a lovely concept that focuses on a floating rock’s small town. It is a great imaginary animation that can be created into an entire movie if elaborated further on. The color theme conveys the fact that the scenario is based in the countryside, probably amidst a dessert, and grading of the sky into a cloudless vastness only confirms so. 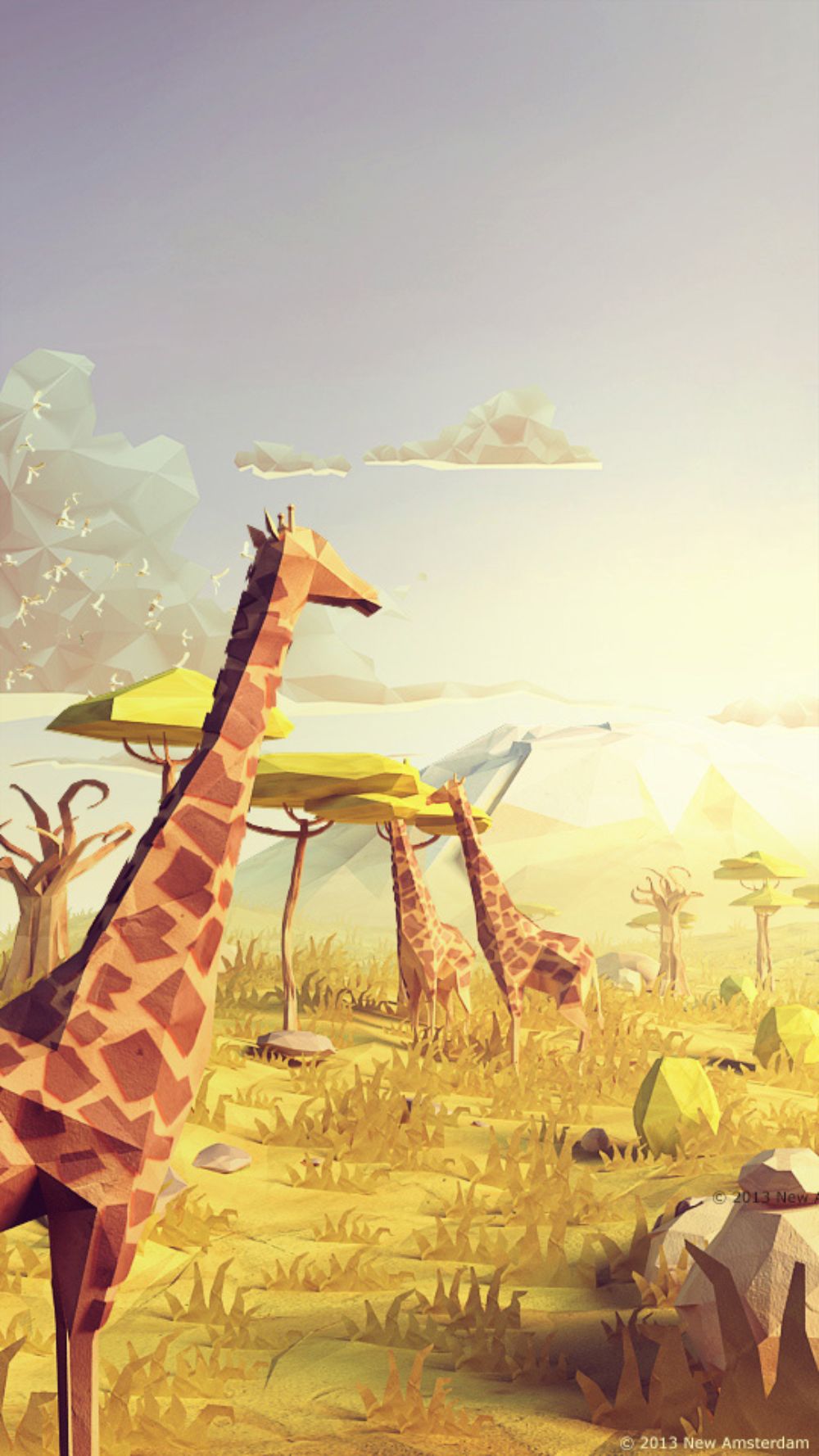 Another magnificent creation by the ultimate creator Mat Szulik, this series is even crazier than World in Facets. Deriving inspiration from the various animals and their forest kingdom, he has created some extraordinary 3D low poly illustrations incredibly intricate and edgy. Not only does the concept capture animals and their habitats, but also human characters, futuristic scenarios, and pre-historic times. Moreover, you can find the evolution of space, power plants, and sea beds in just one wholesome series!

Make it a point to check out this particular series by Mat Szulik if you are looking for inspiration for animation, character building, form development, or even conceptualizing.

This series was a low poly illustration campaign created by the artist Andres Moncayo for the brand Mareol. Mareol is a medicine brand that specializes in the prevention of motion sickness. This series shows a human figure comfortably behind or above the mode of transport after the consumption of this medicine. It is an effective campaign that studies human behavior and captures it successfully in the design strategy. The low poly illustration style adds a certain finesse to the artwork but still keeps it quirky so that the fun element is still there. It is safe to say that if you learn to create low poly illustrations, you can quickly animate and create comics. This particular series is an excellent example of that.

Low poly illustrations are super easy to create. Though it is said and believed that the most effective low poly artworks can only be created using Cinema 4D, you can also create some pretty effective designs using Adobe Photoshop. To create these illustrations, one must be thorough with their knowledge of form development, light, shadow, and color theory. Perspective, scale, and proportion come next in line. However, these skills are incorporated on the way with lots of practice.

There are many advantages of using these kinds of illustrations on your web pages or even print designs. They are very attractive and captivating, but they can also be modified into logos, which can prove to be a pivot point for your brand aesthetic. You can also use low poly illustrations to create gorgeous backgrounds and give them any kind of effect that you desire – like an iridescent shine, or a metallic effect – based on whatever can suit your design better. As discussed earlier, your primary focus must be the light and colors’ choice.

For those who are new to low poly illustration style, you can always learn from the plethora of tutorial videos on YouTube, which can quickly solve most of your queries and give you the much-needed push to start a new project. Low Poly illustration is an excellent design that can make you design look incredibly futuristic, yet raw – due to its choice of basic shapes and flat colors. You can change the look of your entire web page just by using this single most effective design creation strategy and building a visual empire only by experimenting on and on! You would never get bored, and trust us, creating low poly illustrations would make you happy!