If someone asked me to explain what a corporate website looked to them the odds are I wouldn’t use words like “attractive”, “visually pleasing”, or “creative.”

Unfortunately when I think of a corporate website the immediate stereotypes that come to mind are minimal design elements, lots of text, black and white.

The site serves its purpose of conveying the message of the company that it’s representing, and that’s about it.  However, that doesn’t have to be the case.  Let’s take a look at some excellent examples of corporate websites.

Axe has some pretty funny commercials that are both clever and creative.  Naturally, those two elements carry over to their website.  It’s not an overly elaborate site that overwhelms you with text, they keep it simple and have the basics, their products.  They also include links to their social network channels in a prominent spot to help with their marketing campaigns.

General Electric has been around for well over a century.  In fact, you could say the company has been around almost as long as the light bulb.  Despite their longevity, they are still with the times as far as their corporate image.  This was a company I was really expecting to see a sterile, bland looking website once I visited, but was quite pleased with their layout and use of a full-screen background image.

McDonald’s is another fantastic example of a corporate website that keeps it simple, but visually pleasing.  An image that gives a familiar feeling as the focal point of the homepage, the main navigation is unobtrusive, and there are a few graphic quick link images.  Despite the simplicity of the layout, there is a ton of content throughout the site.  Needless to say, it was very well mapped out.

Monster Energy has quite a bit of content on their homepage, but most of it sits just below the main screen and requires scrolling to see.  This is nice as most of what the viewer sees when they first hit the site is visual, which will then encourage them to scroll down, scrolling down causes them to see all their news headlines, which eventually keeps them on the site and browsing around.

I figured EA would have an attractive site and was not disappointed when I came across it. I mean, with a name like Electronic Arts they almost have to have a cool website, right?  A large image promoting their games provides the majority of the visual aesthetics, while good use of typography and a few more ads for new game releases help aid in the visually stimulating department.

Krispy Kreme is a good example of a site with a lot of content on their homepage.  There are a lot of links, adds, and things to click on, all which are kind of fighting one another for your attention.  Thanks to the layout and the nicely blended colour palette they were able to pull this off without making your head spin trying to figure out what you’re supposed to focus on.

Diesel utilizes one main image to attract visitors and encourage them to not only stay on their site but to browse through it as well.  Below the belt line of their main homepage screen is a series of smaller images that direct you to the corresponding section of the site.  There a lot of images and the site is nicely laid out, and with a little more work they could easily make that exact layout responsive.

Coca-Cola did a great job with their site. They gave their website a familiar and friendly feeling with that horizontal band of people having fun.  They do not focus on a lot of text, just a few links, social media links, and some other quick links. 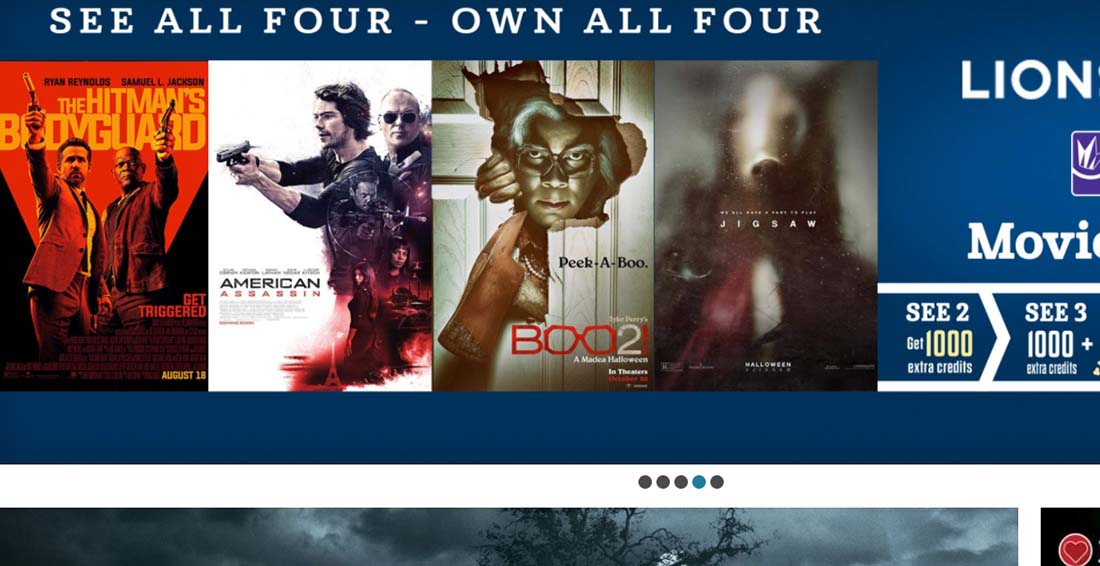 Regal Entertainment Group was another site I was expecting to drench my visual senses with an abundance of attractiveness, and they did exactly that.  A background image promotes a new movie release, while each section in the main content area of the site includes an image to help capture your attention.  There’s so much going on throughout the homepage that the navigation was the last thing that I noticed.  Whether that’s a good thing or a bad thing depends on what you think the average visitor is going to want to do on the site and how quickly they’ll be able to get themselves there.

Rolex is a brand that doesn’t so much sell a product as they do a statement.  A Rolex owner does not simply own a watch, they own a Rolex.  Establishing that kind of image for a brand does not come easily, and that was exactly the reason I was quite pleased when I came across their site and realized it’s not a bland corporate site, and that it too makes a statement.  A bold, well crafted, and pleasing to look at the statement.